Posted at 05:58h in race review, travel by The Bikeworks Crew

It’s almost spring, so that means it’s time once again to get out and do some bike racing in some uncomfortably cold almost-spring New Mexico weather.

So last weekend I (Lucero) loaded up my new battlewagon, aka Code Brown, aka The Funmobile, and headed down to Silver City for the 3rd annual running of the Zia Rides Tommyknocker 10 race.
This race is the only 10 hour race in a series of 12 hour, and one 24 hour, races. The 10 hour format is to accommodate the short daylight in February, and avoid the need of using lights, in case you were wondering. 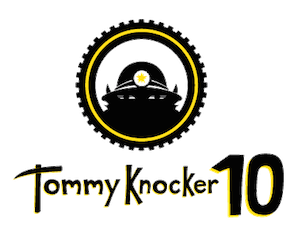 Just in its third year, this race has grown very quickly in popularity and it sold out for 2017. Being very caught up in the effort of moving the shop (did you hear, we moved!), by the time I realized the race was coming up it was already sold out. Fortunately John The Viking found himself in need of a last minute teammate substitute, and I was the man for the job.

With a Friday afternoon planned departure, the Mark Castelo and I found out on Thursday evening that we were both planning to drive out alone. So I invited the Mark Castelo to join me in Code Brown for a noisy, slightly below speed limit, and windblown trip.  Thankfully he joined me, and we had a good ol’ fashioned buddy adventure on our hands. 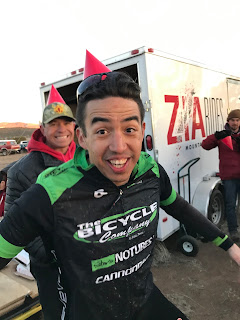 The one and only Mark Castelo, never not smiling.
We made it to the race venue without any trouble, which was nice, because a) I don’t 100% expect my new (old) van to make it through every road trip without trouble, and b) I didn’t 100% expect my new bike rack setup to actually succeed in holding onto the bikes on the interstate with very strong winds. 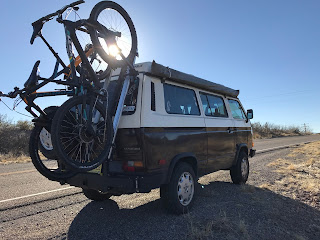 As seen above, I decided to take two bikes to race on, a brand new Devinci Django 29 with a custom build kit and Shimano XT Di2 electronic drivetrain, and our Yeti SB5+ demo bike set up with 29″ wheels.
Both bikes rode awesome, and I would have to spend significantly more time on each to figure out which one I liked better. And both bikes are now (still) completely caked in mud and an utter mess. 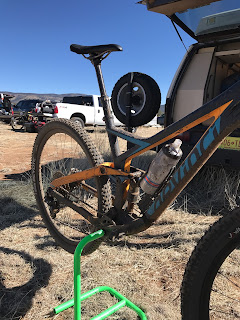 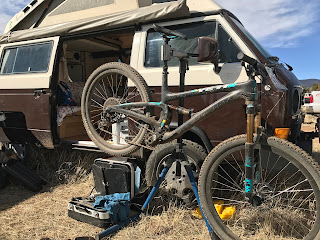 Why so muddy? Well, this year there was 8 (or 9 or 10) stream crossing per 12 mile lap on course. And a couple of the stream crossing were decently big, as in you had to put in a pedal stroke or two to get through, and deep enough that if you hit them with speed you were soaked from the waist down.
These steam crossing were the talk of the race. Mostly because the temperatures were in the low thirties over night, and I’d be surprised if it hit 50 during race day. So everybody had soaking cold wet feet by about mile 2, and was finishing their laps with numb toes. I have no idea how the solo riders were handling it, as I was so happy to have an hour in between laps to change socks and shoes and get my feet dry and warmed up.
Despite the cold windy weather, and all the frozen toes, everybody I saw out at the race was enjoying themselves tremendously.  As usual, it was all good spirits, high fives, hoots and hollers, and plenty of pints and pizza as the race drew to a close and we watched the final racers come across the finish line. 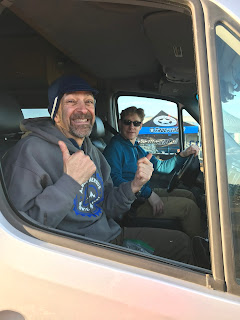 The Dr.Dave and The Dr.Brad, happy and worn out from their solo races. 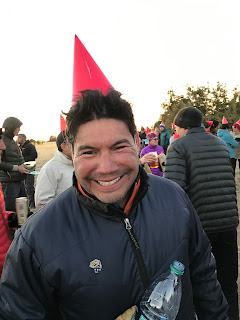 The MV, looking like he’s about to cause some trouble. 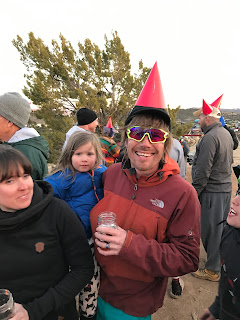 The Trevor, who’s 10 year old rode 3 laps (36 miles!) with him.
We were rewarded with a wonderful sunset. 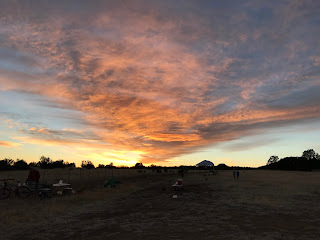 And everybody was handed a birthday hat and we sang happy birthday to Seth, el Capitan of Zia Rides, and he turned 40 that day (ewww, old, gross). 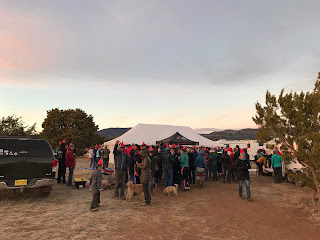 John the Viking and I were out to enjoy ourselves, and just put in a couple of good efforts, with no goals of getting on the podium (and we succeeded in enjoying ourselves and we got nowhere near the podium, win win!).  Jay and Kevin, racing for our newly formed Elevate PHW / Bikeworks ABQ race team, did manage to take the win in the Mens Duo category (again). And team member Vern picked up the 3rd place trophy in the Mens Duo with Barry on his team. 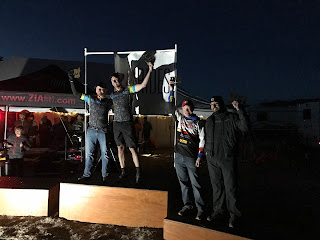 It was a great weekend, during which I never really felt warm, rode my mountain bike more than I have in months, filthied up a couple of brand new bikes, and totally didn’t even break down once in Code Brown (I’ve heard there were some bets against me, no love for the 30 year old VW’s!).  We are all now fired up to have mountain bike race season back upon us. Plans are being hatched for the next Zia Rides event, 12 Hours in the Wild West, in Ruidoso in April.  You should join, I expect it will be much warmer, there will be fewer (or zero) river crossings, and we can all camp out, drink too many beers, an have sore legs and sore cheeks from laughing and smiling so much.