Posted at 05:13h in awesomeness by bikeworks505

Hey there internet website readers.  Long time no see. I blame myself, really. I mean, you could write me stories, but its cool, I’ll do the stories, don’t worry.

So, stories huh? Want to hear a story about me crashing in a great big painful stupid way, but where I don’t get seriously injured so we can all have a laugh and not feel guilty. Yeah you do.

It all started way back around lunch time today, when a group of us headed out for a few hours of pedaling in Otero, in a civilized, friendly style.  It was one of those rides that turned into an impromptu big group, because everybody happened to be free at 1pm on Sunday.  At least all the beautiful people happened to be free. 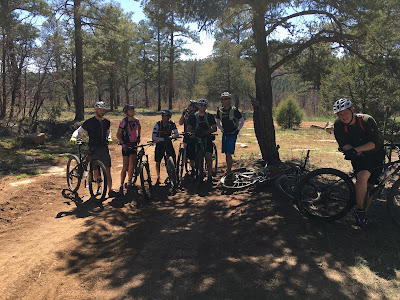 (I only associate myself with the beautiful people.)
I don’t know if you know this, but mountain biking on a warm spring day with a bunch of your friends is a pretty awesome thing to do.  As a result, spirits were high.  Also, I was riding a new Yeti, the SB45c to be exact, which was resulting in high spirits as well. 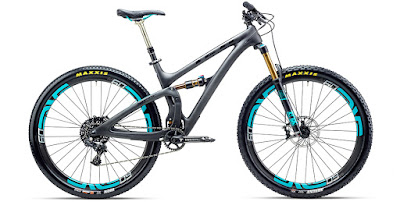 The Yeti SB45c. You totally need one.
It’s a real fine bicycle, and it makes you feel confident going very fast over the big rocks and drops and jumps and stuff.  But the problem is, I’m not so good at the jumps part. So descending Otero Canyon I got a little over zealous and took one of the larger rock-pile jumps. You know, the type that spits you straight up into the air, with a completely flat landing, and it takes everything you got not to land completely on your front wheel.
Well, I didn’t quite get it done. 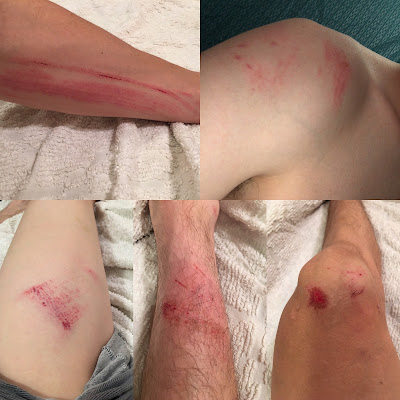 The interesting part is trying to decipher all my bruises.  I managed to hit/bruise my right ankle, knee, thigh, hip, shoulder, and palm.  But I have that long scrape running down the length of my left forearm, and I can’t figure out how, or what I scraped against.
I pretty much rode my front wheel until it hit a granite slab, which I then splatted onto, best as I can recall.  Quite the rookie jumping mistake.
Disappointingly, I only took the jump because Charlie took it right in front of me, and he made it look easy.  Stupid Charlie, he should have crashed for my sake.
As for my fancy pants new Yeti, it came away relatively unscathed. 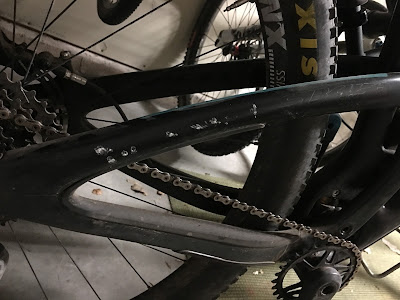 The only part of the bike that hit the rocks is the driveside seat stay, as shown.  But mostly what you see there is a frame protector sticker that has done its job, and is now peeling up.  The frame protector is from a small company called Invisiframe out of the UK. 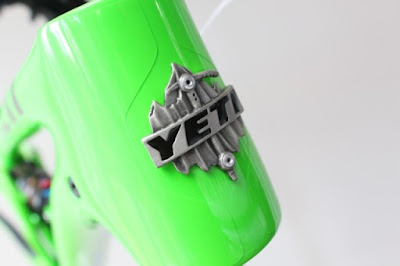 Go to the Invisiframe website. Do it! Do it now!

These are full frame clear sticker kits, from 3M. They are made specific to the bike model and even size. They come in gloss or matte finish. They are a wet application, and they are quite tricky to put on nicely (at least for me they are).  I haven’t pulled the damaged piece off yet, and I can tell that the carbon did get a little scratched underneath, but I’m pretty sure that the Invisiframe just paid for itself, and I would have been very sad with a very scratched bike without it.

The kits go for about $115 once we get them here to the US, depending on the exchange rate at the moment.  I have been doing them installed for around $200, maybe more depending on how dirty the bike is and how many cables/hoses have to be removed first.  So, if you like keeping your shiny new expensive toy shiny and new looking, give it a thought, it seems to work.

This wasn’t my first time riding the new Yeti.  I built it last Thursday, and then took off Friday morning for a weekend in Flagstaff and Sedona with (stupid no-crash) Charlie and some Flagstaff friends.  It was a silly good time, we got 3 days of riding in, about 20 miles each day of singletrack, and I broke the SB45 in real good.

Some things that happened along that trip were…. 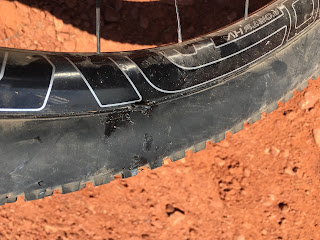 Charlie and I achieved Ninja tire-plugging status, with this 1/4″ long slice right at the rim successfully repaired using a Panaracer plug kit on the trail. He probably has 75 miles on the tire since we plugged it, and no problems.
I have mostly been using a more simple kit made by Genuine Innovations, and I have become very fond of those little booger looking strips. If you haven’t checked them out yet, you should stop by and grab some, it’s $6 very well spent. 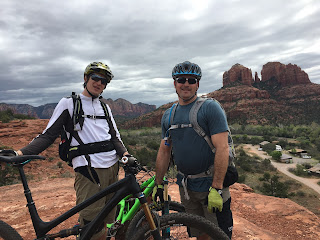 Charlie and I posed for a stereotypical Sedona pic, which I then shared on the internet, which caused quite a stir, since we are so shockingly handsome. 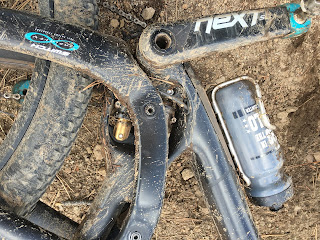 My bike got nice and muddy, as it snowed 3 inches Friday evening in Flagstaff, and we rode there on Sunday.  People are often worried that the Switch Infinity link on Yeti’s is delicate. But it’s not, and I took a bad upside photo of my muddy bike to prove it.  Boom, problem solved, end of discussion. 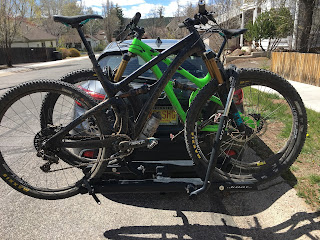 Charlie was also riding a brand new SB45c, it was totes adorable, we were both riding brand new Yetis of the same model.

I talk to a lot of people that have never ridden in Flagstaff, but have been to Sedona numerous times. Flag is a ton of fun to ride in, there is some really challenging stuff, and I highly recommend it.  I also like the town quite a bit more than hanging out in Sedona, which is often overwhelmingly touristy.  And if you are in Flag and need bike stuff or trail info, you should go to Flag Bike Revolution, because they are rad.  So there, one more of my opinions shared with the world even though nobody asked.

Well, that’s about the end of story time.  Thanks for joining in.