Posted at 03:42h in awesomeness, race review by The Bikeworks Crew

24 Hours in the Old Pueblo is the kind of fun that takes some time to recover from.  Typically you get home wiped out, filthy, and disheveled.  And you spend a little time telling yourself that you won’t be doing that again.  But like anything, the exhaustion fades from memory while the stories of hijinks and glory grow.  Six months later you’re scheming on next year, and before you know it you’re bumping along in the back of a Westy for seven hours, staring at dog ass and drinking banquet beers. 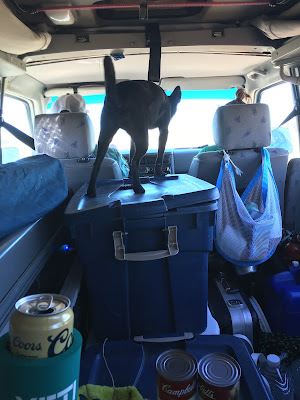 (little Neptune surfed his way to AZ, while I contemplated the upholstery and trucker bombs)
I have been attending Old Pueblo intermittently over the past 13 years.  My last two efforts were duo races with Danny, stories of which I am sure can be found elsewhere on this here website.  This year we were on a 4 person singlespeed team, consisting of myself (Lucero), Danny, Anona, and Ryan Travelsnacks.
Danny, Anona and I drove out together on Friday in their  Eurovan camper, while Travelsnacks and our friend Maggie showed up like rockstars at about 10am on Saturday (race starts at noon).  Preparations were quickly made and the race was off before we knew it. 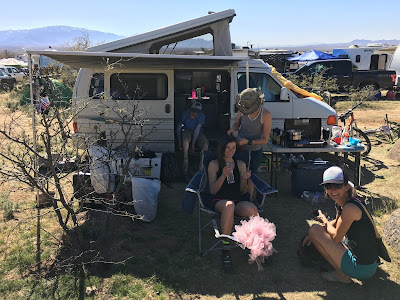 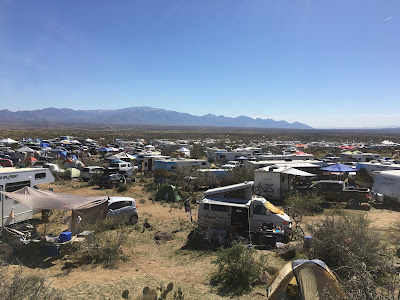 (the sprawling “24 Hour Town” is always a little shocking)
One of the “things” about Old Pueblo is the LeMans style start. With such a massive field, the very long LeMans start provides a way to thin the crowd out a bit. Serious racers run hard, soloists and partiers take their time.  I even saw a table stationed along the run full of half filled cups for beer handups. 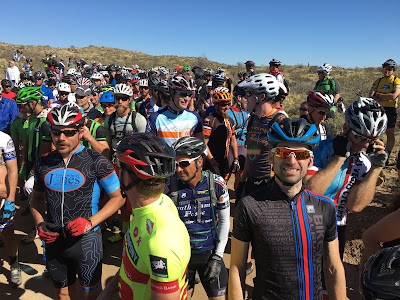 (here is Ryan, flying the colors, lined up near the front waiting to run)
One of the other “things” about Old Pueblo is the sheer size.
After I handed Ryan’s bike off, I stood and filmed the start for a bit.  It just goes on like that for several minutes, while the horde files in and grabs their rides.
Our race got off to a good start, with our whole team putting in big efforts. I managed to get a flat, and managed to bungle the fix with a too-short valve on my spare and a broken co2 inflator.  As I realized I needed bailing out, a guy wearing a 2 Wheel Jones jersey rolled up and offered help.  He gave me a tube and a co2 and chilled out while I got sorted. When I offered to give him something for payback, he laughed and said “nah man, It’s cool. My brother owns this shop (points at jersey), I’m pretty styled out.”  To this I could only reply, in my embarrassment, “awesome, thanks!”  I didn’t feel like explaining that I also own a bike shop, but couldn’t manage to fix my own flat. 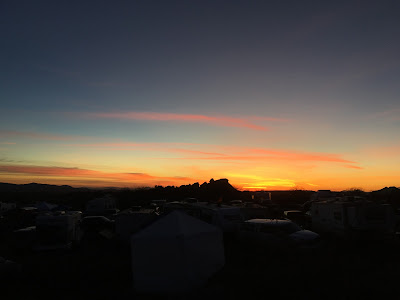 (out of context sunset pic)
The size of the “camping” rigs out at the race is always a little shocking.  It seems that an unofficial competition is played amongst many to set up the most elaborate base camp.  Massive RV’s and 5th wheels, multiple EZ Ups, giant backyard grills and gourmet meals, movie screen projectors, couches, you will see it all out there.
Generally the crazy setups just add to the spectacle of the race, and help make everything quite exciting.  But the constant running of generators gets pretty old, and the race day morning traffic within 24 Hour Town was completely ridiculous.  At one point it actually felt a little dangerous trying to weave my way down to the exchange tent through the incoming trucks .  I’m assuming most of the traffic was friends and family showing up to watch the race start, and it seems that most of them could have parked down the street and walked to their camps.
So, if by some chance the powers that be at Epic Rides are reading this (the aren’t) my one suggestion to improve an otherwise perfectly ran race is to make a parking lot, possibly with a shuttle service, to handle the Saturday morning visitor traffic.
Our team’s camp was pretty minimal, hiding under the Eurovan awning for shade, with a couple of tents and a cooler.  Maggie went even more minimalist and blew off setting up her tent.. 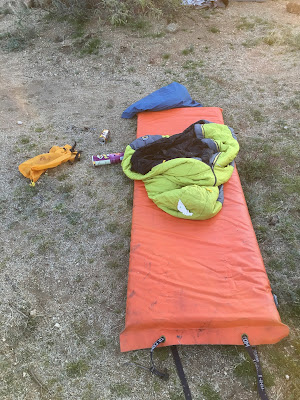 As I returned from my 5am lap, and saw the mat on the ground with tipped over cans of pringles and beer, I couldn’t help but laugh at the contrast to the luxo RV’s all snug with their sleeping inhabitants.
Which brings me back to our race.  So I headed out for a 5am lap, after trying to back out of it.  I was suffering from allergies a couple days before the race, and I came down with a head cold during Saturday.  When I woke up at 4:30am Sunday morning to go out for my 4th lap, just drinking water made my throat hurt.  I didn’t think I could do another lap, as I was going into coughing fits and breathing was difficult.
Ryan was up, and told me not to worry, skip my lap, we were just there to have fun. But I had been watching Ryan watch the results, and we had been bouncing between 3rd and 4th all night.  Danny was out on course, and Anona was sleeping.  After fantasizing about not riding, I realized that nobody was ready to take my lap and I would be tanking our race if I didn’t go out.
So I suited up and headed out, promising to my team that I was going to go nice and slow.
I got through my lap, but it was about 30 minutes slower than Danny and Ryan’s laps (1:05 vs 1:35, approximately). 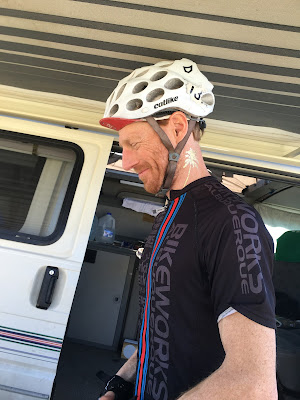 (sparkly gold temporary tattoo war paint)
I was allowed to skip my last lap. Which was fine, because by that time Danny and Ryan had finally gotten warmed up and really started flying.  They went back to back for our last 4 team laps, securing our 3rd place position by about 40 minutes and finishing just 30 minutes off 2nd place. 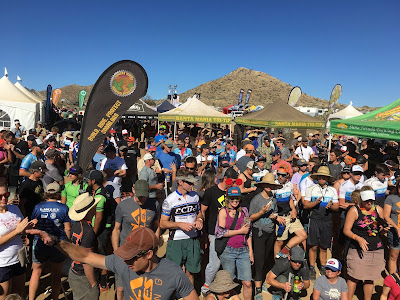 (here is my view from the podium) 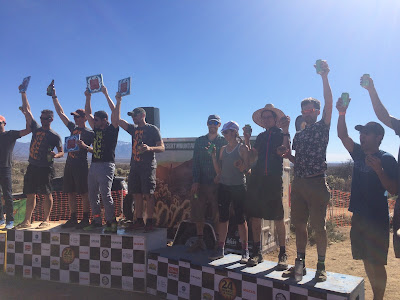 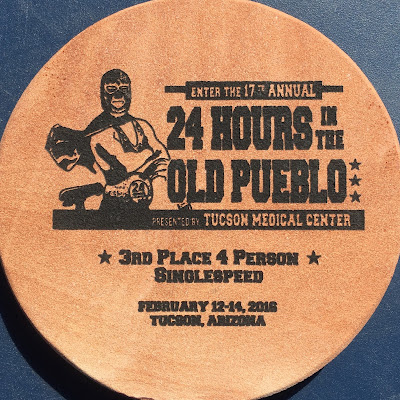 After podium pics and high 5’s, I jumped in with Ryan and Maggie and we boogied back to ABQ, getting in around 11pm.  It was a long drive.  It was one of those drives that had you questioning what you choose to do for fun.
Old Pueblo is pretty much a guaranteed good time, if the weather cooperates.  The organizers are on point, the goody bag is amply stocked, yummy food vendors, beer flowing everywhere, and of course a screamingly fast and fun 17 miles of singletrack.  And this year, the weather was perfect.  It was a fantastic episode of Old Pueblo, and I’m recharged and ready to do it again.
Thanks for reading!