Posted at 05:27h in Uncategorized by The Bikeworks Crew

Seriously, you guys, I like rode so hard at the 24 Hour race that just now, like 3 weeks later, am I like recovered enough to finally write about it. For reals.
Actually, no, that’s a lie.  I has been like 3 or 4 weeks since the race happened, but not writing about it for so long has more to do with working long days, and choosing sleep, and a little bit of riding bikes, which are almost all good things.

So, onto the race.  As usual, it had a lot to do with bacon. 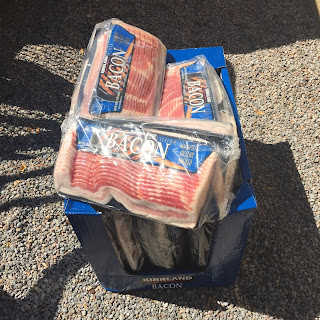 For several years running, we have sponsored the ever popular Bacon-Station. Situated mid course, and just before the most fun few miles of descending in the race, the Bacon-Station seems to have become an important part of the Enchated Forest experience.

We kept a couple pounds of bacon for our base camp, and Vince made some killer bacon pancakes to get us fueled pre-race. 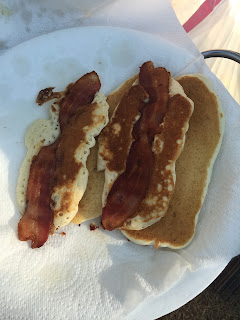 Take the bacon and you put it in a pancake. Bacon pancaaaaaaaaaakes! 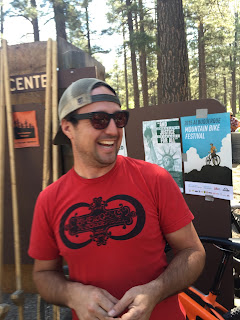 Who makes the bacon pancakes? This guy.

How much bacon do you bring to feed people on course at a 24 Hour race?  About 50 pounds seems to work well.  At the ‘ol Costco the bacon is sold in 4 pound packages (if 1 pound of bacon is good, 4 must be great!), so I picked up a dozen packages.  Ringing up with my 48 pounds of bacon, a 48 pack of Kirkland brand light beer (I just had to try it.  It’s not the worst cheap beer I’ve ever had, but I doubt I’ll be buying it again) and a few other grocery items, I felt like I had a weird selection of stuff.  But the cashiers didn’t think anything of it, and then I started wondering about what it would take to actually get their attention with your purchases.

The past couple years we used (and killed) microwaves for cooking the bacon.  Open flames weren’t allowed due to fire concerns, so the microwave was the solution. However, it turns out that cooking about 50 pounds of bacon over the course of 24 hours will kill a microwave. So this year we had the genius solution of using George Forman grills.  It worked out pretty good.  As a bonus, Savers thrift store had no less than 10 used George Forman grills to choose from.  I picked up 3 just to be safe.
I felt absurd buying 3 George Forman Grills at the thrift shop that morning, and the silliness of it had me grinning like an idiot trying not to laugh at myself, for the second time in one day at the checkout line.  As a result, I’m sure I just looked that much more ridiculous to the cashier, but again there was no question or comment. I’d like to think I caused a little confusion in her day. 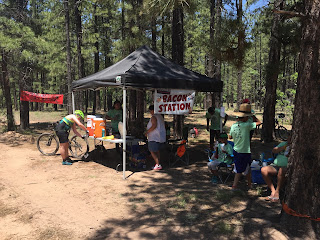 Here is the station, being run by the amazing volunteers that show up every year.
As we are on the topic of me buying weird things before a bike race, I am remembering a last minute trip to Sprawl-Wart before the 12 Hours in the Wild West this spring.  I wanted dog tie downs and leads to contain the pooches, and we needed some Almond milk for the kiddo’s cereal.  And on my way to finding the milk I came across the liquor aisle, and happened to grab a handle of Jack Daniels.  So, dog ties, almond milk, and a lot of whiskey.  I asked the cashier if this was one of the more odd collections of 3 items she had seen. I believe her reply was “not even close.”  I can only imagine what would get the attention of a seasoned Sprawl-Wart employee.  I have since found out that this is a bit of a game people (hypothetically) play.
Besides bacon, Bikeworks also sponsored the Neutral Support station this year.  It was a bit of a last minute thing, as the organizers needed help and thankfully Vince and Mike were up for it.  Here is our setup, just past the start/finish line in “pit row”: 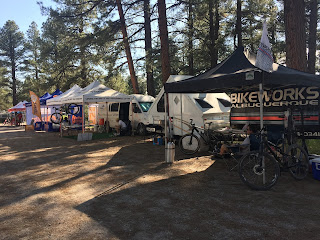 However, just hanging out and fixing flats for 2 days sounded boring, so Vince and Mike signed up for the duo-singlespeed category.  They planned on each taking a few laps casually in addition to fixing bikes and drinking beer etc.  To make things more interesting, they chose to ride Mike’s awesome Schwinn Panther coaster brake “klunker”.  They both rode the same bike, just adjusting saddle height between laps. 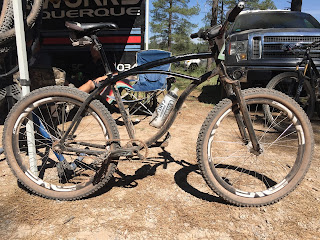 One speed, rigid, coaster brake only, carbon rims, DH tires, and the legendary Schwinn Panther frame.  Drool on that you bike nerds!
Despite claims that they were barely going to ride, Mike and Vince got inspired during the race and finished a total of 9 laps, coming in 2nd place.  The bike worked very well, however Mike did feel the need to re-pack the coaster brake mid race as they had managed to burn off a lot of grease on the descent. 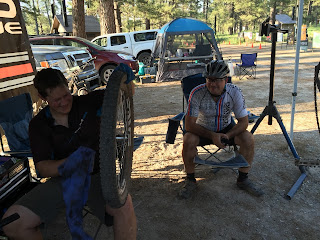 Mike repacking the hub, Charlie providing moral support.
The “Neutral Support” job turned out to be a fair bit busier than we had expected.  I think there was some different ideas about what neutral support is, and at least a few racers seemed to think it was the “free tuneup right before you race station”.  We weren’t entirely prepared for the level of disrepair that some bikes were in when they arrived to the race, but we managed to save the day for more than a few racers, and their gratification was rewarding.  But if we agree to do it again, we will bring more shop supplies, and more spare parts, and maybe a credit card swiper.

Personally I was racing Solo Singlespeed, as I have been doing for the rest of the Zia Rides series.  I have been racing a Spot Honey Badger this whole year. It is an awesome steel frame the Spot recently decided to discontinue. Hopefully they will replace it with something even better (and we happen to have a couple left on our sales floor, on sale even!). 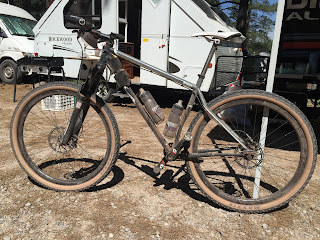 This bike has gone through a couple of changes this year so far.  The most exciting being the Enve M60 hoops on Chris King hubs, wrapped in some Maxxis Ardent skinwalls just for style points.  I am really quite enamored with these wheels, they are so much more laterally stiff than the other 3 pairs of wheels I’ve had on this frame that I actually ride the bike differently, turning in later, cornering harder, braking less and feeling the tires grip with more confidence.  It’s stupid fun, I’m hooked.

This was my first real attempt at soloing a 24 hour race, but after two 12’s, and a 10 finished already this spring I figured I was in a good place to give it a shot.  I wasn’t taking it too seriously, I was riding pretty fast laps because the course was fun, and then taking decent brakes every other lap or so.  Only drank a couple of beers during the day, and at one point Vince cooked up some steaks, which I don’t believe is on the approved mid-race diet, but it was amazing. 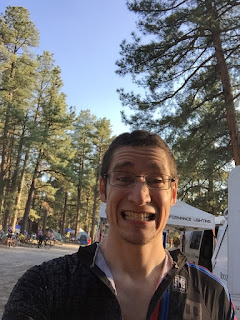 While riding I had the idea of taking a selfie after every lap, but I managed to remember just once, about 5 laps in.

I managed to only take about a 4 hour nap in the night, and get back up in time for the sunrise lap, which is always my favorite part of a 24 hr race.  In the end I finished 4th, behind 3 badasses who didn’t stop at all during the night.  I finished 11 of the fourteen mile long laps, a personal mileage record on any sort of bike.  The singlespeed winner, Rich Emery, put in an impressive 15 laps. 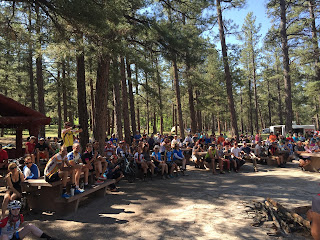 The turnout seemed good this year, not sure how many people raced, maybe a million?

The co-ed 4 person category turned out to be very popular this year, and a few very competitive teams did some good battling through the night.  The Flagstaff Bicycle Revolution team took the win with 23 laps, after spending much of the race neck and neck with the Stans No-Tubes team.  It was fun for us to keep tabs on the battle as 3 out of 4 members on each team are good friends and customers of ours (the 4th on each team we just don’t know, but I’m sure we’d be friends given the company they keep).

Charlie and Danny were also on a 4 person co-ed, with Anona and Brooke. They finished about mid pack with 19 laps. I’m sure they have some stories to tell from the race, but I don’t know them. I think I saw Danny for about 10 minutes during the whole race, which is a bummer, because we totally don’t get to spend enough time together.

And that’s about all I have to talk about for the race.  I’m kind of out of pictures, and really I just rode my bike in circles the majority of the time.  I think some other stuff must have happened, I heard there was trouble with somebody smoking weed in the outhouses (odd choice when you are out in the woods), and something about somebody starting a forest fire, and some drunk locals causing a ruckus, but I really missed it all.

If anybody has any pics of the Bikeworks crew they’d like share, please send ’em my way!