Posted at 14:12h in Uncategorized by The Bikeworks Crew

Many (most?) mountain bikers in New Mexico have taken a riding trip to Sedona at some point.  It is legendary, and totally rad. On my journeys to Sedona I have just cruised right past Flagstaff, never stopping but always curious what the area had in store for mountain biking fun.
This past weekend I headed out to Flagstaff with a couple of friends, Paul (aka Taco Truck) and Marc (Lindarets)  to be shown everything Flag had to offer by our friend Alex (Alex), who moved there from Albuquerque a couple of years ago.

We headed out of town on Friday after work, finally getting on the road around 5 or so. Flag is a pretty easy drive, only about 4 1/2 hours.  We got to Alex’s house sometime after 10pm, and proceeded to stay up drinking beer unnecessarily late into the night. We were all far too excited for the days ahead to go to bed.

After going to bed too late, we proceeded to wake up too early.  A combination of the hour gained, the skylights in Alex’s living room, and a loud coffee maker had Paul, Marc and I up and milling around by 5:30 am.  It has been a long time since I’ve seen 5:30 am, but the anticipation of a big day of riding new trails had me awake and feeling energetic even before my requisite 3 cups of coffee.  It sure is easy to get out of bed when you have nothing but riding bikes to look forward to for the next couple days.

Adding to my excitement was the fact that I had brought our Yeti SB5-C demo bike to ride for the weekend. 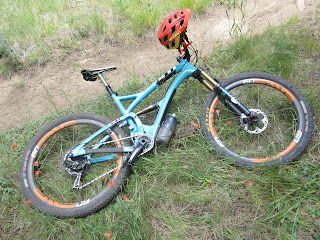 I hadn’t ridden this bike since the Glorieta Enduro race a few months ago, so I was very excited to get some quality long days in and really get a feel for it.  After 60 something miles and 8,000 something feet of elevation over two days on singletrack, I can now say without question that I love this bike.  It does absolutely everything I want a trail bike to do. My single complaint before the weekend was the lack of an accessible water bottle mount, but now I am willing to forgive that flaw.  I am also unwilling to return this bike to our demo fleet.  Currently, if you want to demo our SB5, it’s gonna take some sweet talking to get it out of my hands.

But back to our early morning….  Our ride plan was a 9am meetup with a couple of Alex’s local buddies (Garrett and Mike) and his lovely girlfriend Erin.  Having woken up at 5:30, we had time to watch the Tour de France race up Alpe d’Huez while Alex made us breakfast burritos before the ride.  I was in my happy place for sure.

One of my favorite things about riding in Flag was that the trails were a quick ride from town.  We pedaled for about 5 minutes through neighborhoods before we were onto little singletrack connectors through other neighborhoods, and then a couple of quick miles later we were in the forest. 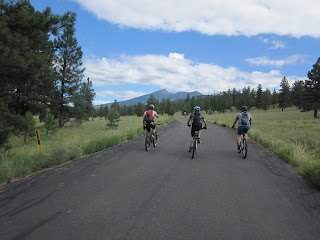 (just a couple quick miles on pavement and we were in the dirt)
We didn’t touch a car between our arrival to and departure from Flagstaff, which was very gratifying.
Our course on day 1 had us climbing a steep road a couple of times… 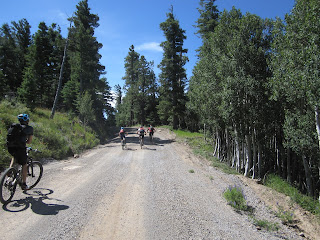 and bombing down a selection of trails around it.  We enjoyed what seemed to be the local downhill shuttle trails, including one called Wasabi that particularly stuck out in my mind for its challenging (for me) log drops and beautifully sculpted berms.  Clearly some locals have worked hard on that trail, and it is a blast.
The top of the dirt road had some nice views… 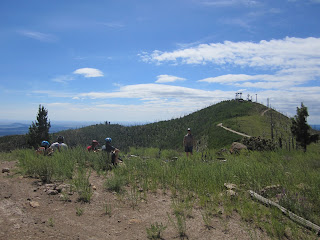 I always enjoy a scenic meadow… 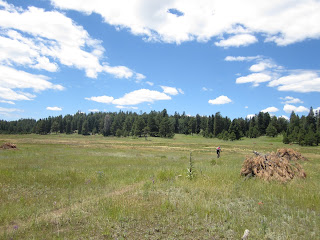 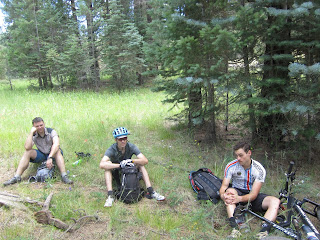 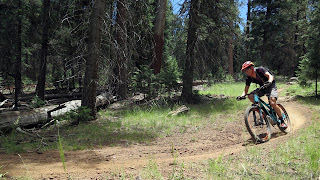 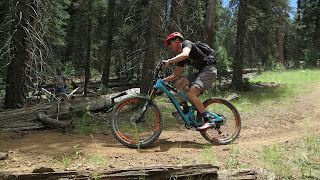 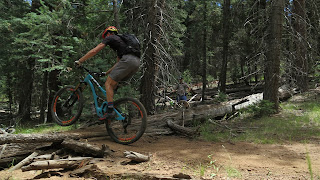 By the end of the last big climb on Saturday, everybody was looking a little beat… 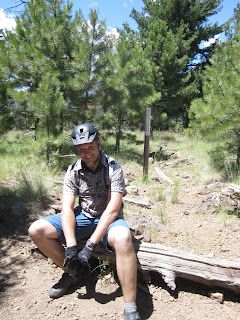 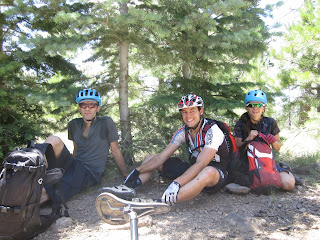 (happy tired Marc, Alex and Erin)
This is Garrett, he was riding 26″ wheels, a triple crankset, and he didn’t have a dropper post.  I tried to explain to him that his bike was obsolete and un-rideable, but he couldn’t hear me because I was so far behind him the whole day.  Hopefully he learns soon… 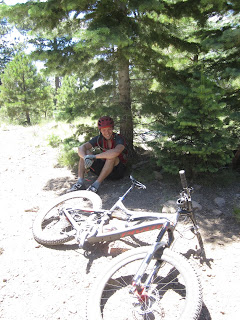 We finished our first day by riding straight to a local brewery and proceeded to be the smelliest, dirtiest, happiest people on the patio while we stuffed our faces with burgers and sandwiches. 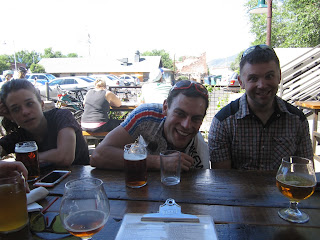 I don’t remember the stats from day 1, but it was something like 30 miles and 5,000 ft of climbing.
Day two was planned to be less technical and more pedally, with our route taking us out from downtown quickly onto singletrack, and eventually to the base of the ski area.
We started the day by going downtown to a bagel shop, grabbing some bagel sandwiches to stuff into our packs for lunch, and something to bring Erin who was working that day at Flagstaff Bicycle Revolution (FBR), which is a very cool shop I had been hearing about and wanting to check out for a while. Over several years a few of my sales reps have told me that FBR and Bikeworks had similar vibes going, so I was curious.  However, their shop is in a cool old building stuck between a brewery and a local pizza place, and they have a proper coffee bar in the shop, so I’m kind of super jealous.
While at the shop, we ran into our friend James, who used to live in Albuquerque but moved to Flag and now as working at Flag Bike Rev. He had heard I was in town, so he intentionally wore his very last wearable Bikeworks sock that day…. 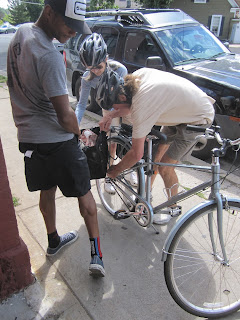 I was very flattered, and James should keep his eyes peeled at work for a care package from Albuquerque.
We pedaled off from FBR and quickly jumped onto some singletrack, then some dirt paths through town, then into the Forest Service land, and at some point we hopped onto the Arizona trail, and followed it up the 6 mile climb to the parking lot at Snowbowl Ski area. 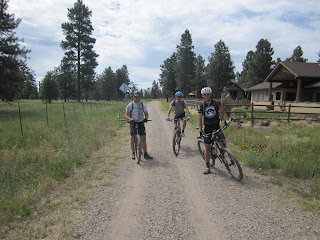 (Dirt path out of town and to the mountain. It sure is nice to be able to get onto dirt so quickly.)
The climbing was real nice, just steep and technical enough to make you work for it, but easy enough to let you stay on the bike with a steady pace.  Once at the top we took a break with some breakfast bagel sandwiches and freeze dried ice cream that Alex had stuffed into my bag. 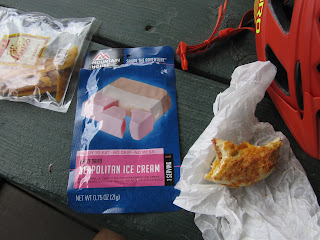 (In case you are wondering, freeze dried ice cream is weird and delicious and deserves a spot in you riding pack) 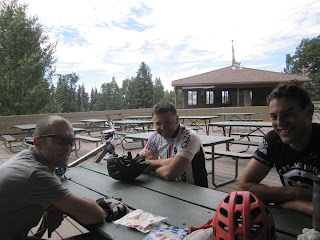 (Bagels and Ice cream and happy tired boys.)
On the way up we saw a few people who were shuttling laps going down the trail.  I hadn’t been paying much attention while climbing, but the trail didn’t seem shuttle-worthy at the time since the climb wasn’t that hard.  But as soon as we started chasing each other down the mountain, I understood.  It was an incredibly fun and fast 6 mile descent.  Nothing was super steep, but it was generally steep enough to go faster than you should be going. There were enough rocky techy spots to keep you on your toes, but enough smooth open sections to let you relax, haul ass, and rip a few turn.  Marc and I chased Alex all the way down, working hard to stay on his tail. It was all goofy grins and high 5’s at the bottom (except we didn’t actually high 5, that’s not really our style).
From there we just basically backtracked until we found ourselves at Alex’s house once again.  We had some root beer floats, got cleaned up, and walked back over the FBR to say hi and grab some beer and pizza for dinner.
And that’s about it.  We eventually wandered back to Alex’s place for the night, stayed up too late drinking more beer and whisky and watching the Tour de France, and got up pretty early Monday morning to grab some breakfast and hustle back to ABQ.   Flagstaff is a rad place to go ride, especially if you know awesome people there that want to show you around and give you a place to stay (thanks Alex and Erin!).
Thanks for reading!