Posted at 04:30h in Uncategorized by The Bikeworks Crew

I have been beating the “do you even Enduro, Bro?” joke like a dead horse.  It is probably a year past due to give it up (Bro).  It has nothing to do with a dislike for the cycling discipline of Enduro racing, but mostly having a laugh at the stupidity of the cycling industry in which I make my living.

Two years ago at the Interbike Bicycle Tradeshow Extravaganza in the lovely cycling village of Las Vegas Nevada, absolutely everything new was labeled as “Enduro”.  It didn’t matter what the component was, headset spacers, cable housing, chain lube, if it was a new product it had been optimized for Enduro. It was stupid, and it deserved to be mocked.

But last weekend (or the weekend before last, whatever) I went and participated in my first Enduro race.  And it was awesome.  I had a fantastic day of riding bikes, racing bikes, and hanging out with friends. I met cool new people, rode cool new trails, rode up mountains until my lungs were screaming, and raced back down until my eyes were watering and my hands were cramping.  It was the biz.

Sadly though, I don’t feel like I can make fun of Enduro, Bro, with quite the same satisfaction as I had before.  Which is probably a good thing, as I was the only person still laughing.

Anyway, on to the sick sick action shots of me racing that you all come here for…. 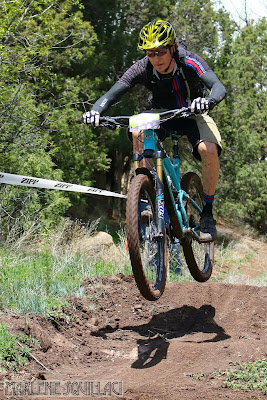 You didn’t even know it was possible to get that far off the ground on a bicycle, did you?
Actually, I feel bad making fun of these photos, because the lovely and talented Marlene Squillaci took them, and if it wasn’t for her skills as a photographer I’d look even more the hack that I am.  (Marlene is the Mom of our teenager in residence at Bikeworks, young Taylor Squidlaunchy, by the way in case you were wondering.)
Several other Bikeworks-ers were racing too! Such as Young Wesleytons, the afore mentioned Young Taylor Squidlaunchy, and Young Mike-hasn’tbeenworkingwithuslongenoughformetocomeupwithanickname. 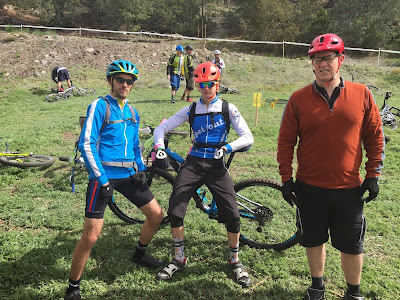 I asked for “game faces”, so apparently that is what you see here.

Also in attendance was our favorite Restaurateur (and second favorite redhead) the Young Jay “Wulfpack” Wulf. 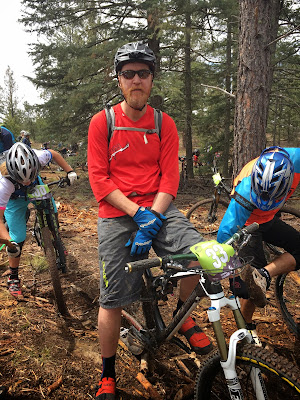 “Nobody calls me Wulfpack”
I mention Jay because a) He helped talk me into attending the race, b) I have a limited number of photos from the race, and c) One of the photos I have is Wulfpack sleeping off a hangover on his tailgate after the first stage. 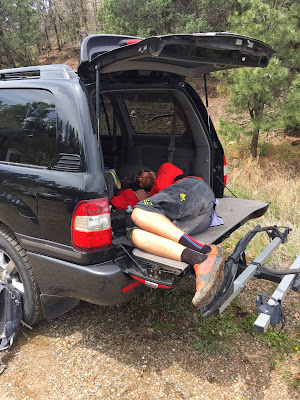 Why was Wulfpack hungover you ask? Well, the night before was the Santa Fe Bike and Brew Festival, and there was brew, and a free concert by The Reverend Horton Heat.  And it was fun (and cold, and a little drunk). 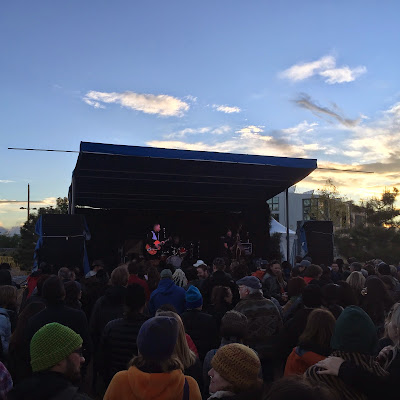 Where was I? Oh right, the racing of Enduro.  Pre race looked like this… 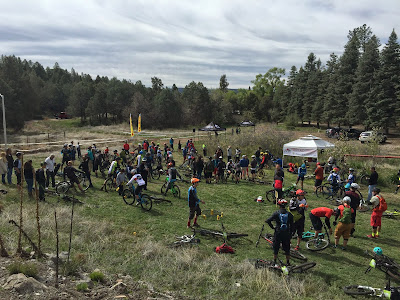 Which is basically what post race looked like too, except everybody was sitting on the grass, and there were beer cans everywhere. 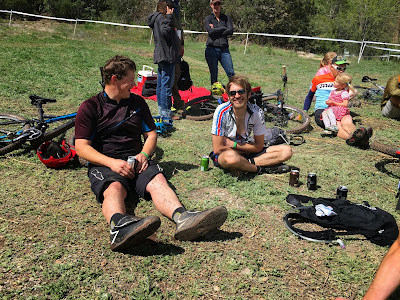 People were a little less smiley at the beginning of “Stage 1” however, because it was preceded by a 2 mile slog in the mud up a dirt road.  I personally did a lot of walking with my bike on my back, and I wasn’t exactly in my happy place. 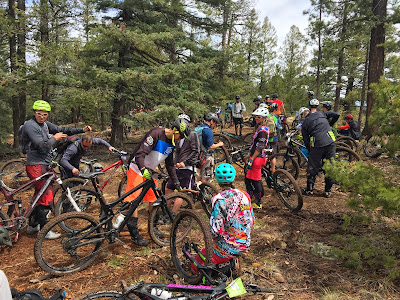 The waiting line for Stage 1, as everybody tried desperately to get some rubber to peek through the mud on their tires.
But the suffering was soon forgotten as we were racing down the newly built “Chili Dog” trail, which was a blast. 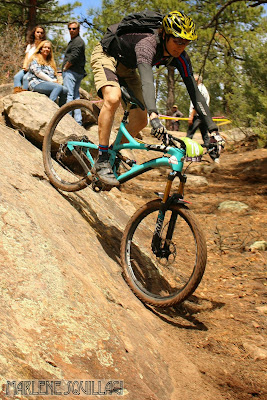 Me, forgetting the suffering, being mediocre, and puckering.
While Stage 1 was 2 miles up and about 6 minutes down, Stage 2 was about 50 miles up and 15 minutes down. (It only felt like 50 miles, it was really more like 5 or 7 or something).  I really enjoyed Stage 2, it was less techy and more pedally and more my style (aka less scary).
Stage 3 was cancelled due to mud. I don’t know anything about it, since I went into the race completely blind and uninformed.
Then we repeated Stage 1 to finish out the day (which was way more fun with less mud and having done it once already).  And by then end, I don’t think many people were sad about the missing stage, because it was a long day still and most people looked pretty worn out.
How did I do, I hear you not asking?  Well, for perspective, our very own Young Mike-withoutanickname showed up as the freak of the race on a rigid Jeff Jones singlespeed with a fatbike front tire. 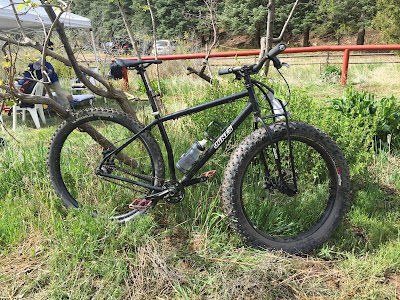 It was so “not Enduro” that people dropped their jaws and shit their pants as he rode by.
So with Mike on a rigid singlespeed and me on a brand new $7,000 Yeti, I managed to beat him by about 5 seconds.  Had we switched bikes, he would have beat me by an hour and a half. 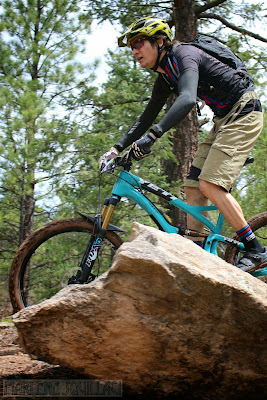 What about that Yeti, you say? Well, it’s the biz. ‘Nuff said.

And we both finished mid-pack or so.  And Young Wesleyton? Well he’s a hoss uphill and downhill, and was in podium contention. We actually thought he was in 2nd in the 30+ Open category, then the final timing took forever, seemed to be a little screwey, and he ended up not on the podium.  But it’s all good. 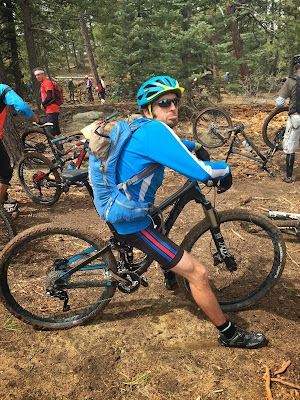 Wesleytons, pouting about the mud, but we can pretend it’s him pouting about not being on the podium (which he totally didn’t do).
And how did Young Squidlaunchy do? Well, he had some mechanicals, which seemed to be a result of his bike brand of choice (which we totally would never sell at Bikeworks), but we won’t get into it because we’re classy (but not classy enough to not mention it. Actually, I don’t think anybody has every called me classy, so maybe I’m just full of it).
So, um, yeah, there’s all the pics that I have. The race was awesome. I had so much fun I can’t wholeheartedly mock Enduro anymore, and if you want to go check it out for yourself  look at the New Mexico Enduro Cup, which can be found below….
http://mountaintopcycling.com/2015-nm-enduro-cup/
And that’s all I’ve got. Boom! Microphone dropped! Proofread completed! Laptop closed! Blankets pulled up! Pillow snuggled! Sleepy time!