Posted at 01:27h in Uncategorized by The Bikeworks Crew

Last Friday afternoon I (Lucero) found myself headed to El Paso to check out the12 Hours of Old El Paso race for the first time. I had heard good things about the race, and I hadn’t ridden a bike in the Franklin mountains in over ten years, when I raced the Coyote Classic “back in the day”.  This time I was traveling with Dave and Brad, a couple of my favorite Doctors.

The entire drive down was windy, and it just got windier as we got closer to El Paso.  By about 10pm on Friday night the wind was blowing so hard we could feel our hotel getting pushed around a little, and I started wondering if the window in our room was going to break.

I took a lousy photo of the flag outside our room, that was getting abused by the wind. It’s a lousy photo, but here it is anyway…

(I assure you, that flag was hanging on for dear life)

Fortunately Saturday morning came with just light winds and scattered clouds, with a high in the 60’s, it was pretty nice weather for riding.

After breakfast we were detoured thanks to the NM Sports Online website, which had Google Map directions linked to the race for somewhere in the middle of the Franklin State park, and about half an hour from the actual location of the race.

Eventually we were able to figure out the actual location, and signed into the race about ten minutes before the start.  This made me really appreciate the unusually late 10am to 10pm format for this race.  Not being an early morning person, I thought 10am was a great time to start an all day ride.

The three of us had registered solo, and we pretty much stuck together the entire race, starting each lap at the same time.  It is a fun way to do an endurance race when you aren’t there to try and win.

The Franklins are pretty rugged mountains.  The terrain was fairly similar to our foothills trails here in Albuquerque, but I have been told that this race pretty much used all the easiest trails around.  With the lack of trees, and mean sharp rocks everywhere, I can imagine some pretty gnarly trails around there.

The course was listed as 9.5 miles, but they decided to tack on some extra and it ended up 11 miles long.  It was a fun course, 75% or so singletrack.  Almost all the climbing was done on sandy two track roads.  There were only a couple miles or so of smooth twisty trail throughout the course, the rest of it was all pretty rough over small rocks.  I was definitely happy to have rear suspension for the race, it was not a course I would have wanted to do more than a couple of laps of on a hardtail.

I was riding my new Giant Trance Advanced SX 27.5. 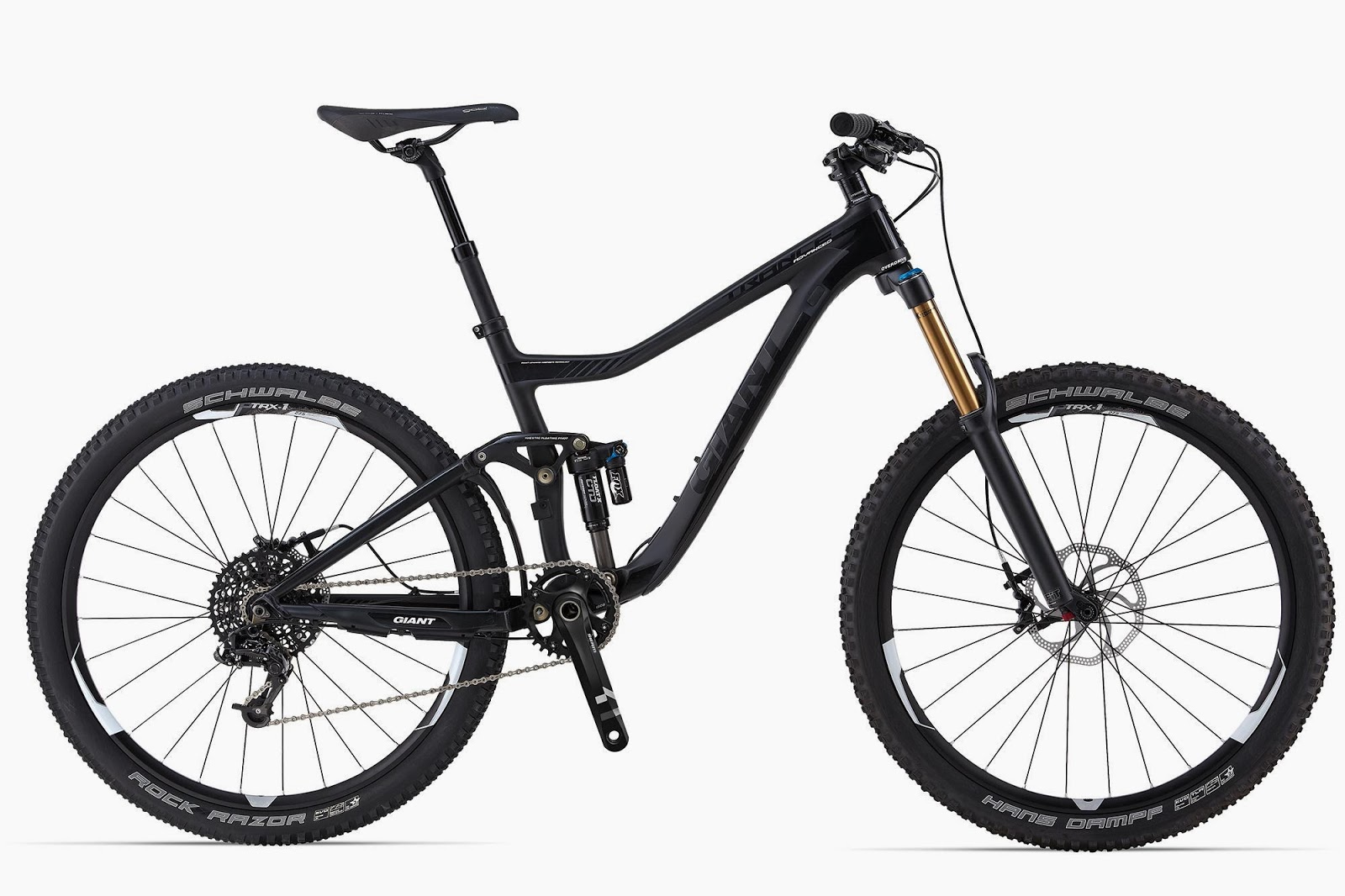 I have been riding this bike since October, and I am completely enthralled with it.  The build spec on it is fantastic, and the only component that I have changed is the saddle.  It’s pretty rare that I will leave a bike stock out of the box, having become rather picky after 15 years of working in bike shops, but I didn’t even swap out the stem or grips on this one, it just fit so well.
The course was definitely manageable on a shorter travel bike, but there were a few spots where the long travel and aggressive tires payed off.

The stock saddle is a Fizik Gobi, which has never fit me well. So I decided to try something new and I got the Sq Labs 611 saddle that we started carrying recently. 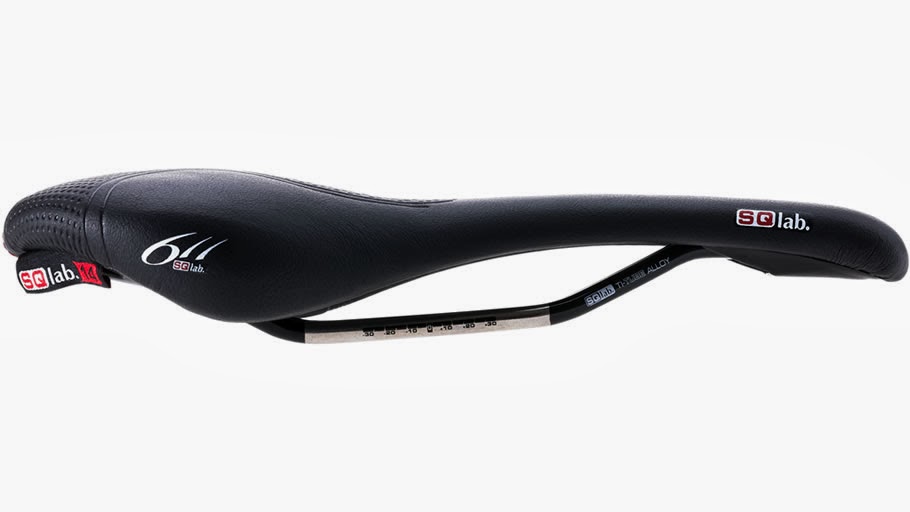 A German company owned by physicians, this saddle has a “stepped” design that perches you up on your sit bones and reduces contact with the other “soft tissue” areas, or the “scranus” if you will.

I rode the saddle for about an hour before taking it to the race for a real trial by fire.  And I was extremely pleased to find that after over 6 hours and 66 miles of riding, the saddle was perfectly comfortable and I wasn’t thinking about it at all.  The shape really does seem to minimize contact area with the saddle, which I like.  I also found that on very steep climbs, when you scooted toward the nose that is was still supportive and the stepped up area in back gave you something to kind of push against.

The saddle comes in four different widths, I was using the 14cm wide model, and I have no plans to take it off my bike anytime soon.

Back to the race, we were riding together and enjoying ourselves.  The laps took about an hour each, and we were taking pretty leisurely pit stops between each lap.  My pit stops consisted of refilling my one water bottle of Tailwind, checking over my bike to see if anything rattled loose, and stretching.

We started selling Tailwind about a year ago.  It is an all in one drink mix that is designed to be the only thing you need for hydration and nutrition during an endurance event.  It is easy to mix, easy to drink, and it really seems to work. 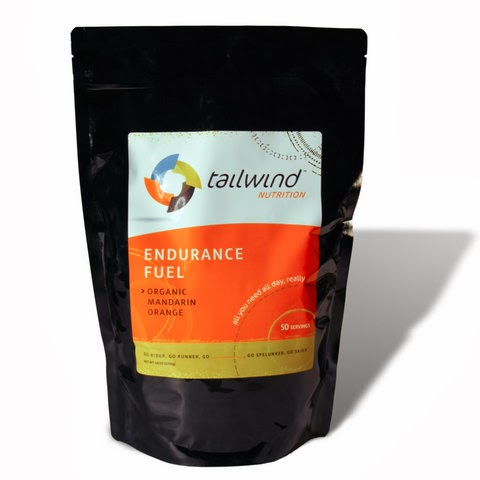 Having a simple plan for nutrition is extremely nice once you start getting tired and simple things get difficult. I had a pretty big Denny’s breakfast, and then just drank a bottle with about 2 scoops of Tailwind per lap.  After lap 3 I smelled some burgers grilling and suddenly I wanted to eat.  So I had a handful of Triscuits and a Hammer Bar. But on lap 4 I felt terrible. So I went back to just Tailwind.  At the end of the race I wasn’t hungry, and I hadn’t come even close to bonking or having leg cramps, and I always have trouble with leg cramps.
Granted, this wasn’t a 24 hour race, and I wasn’t pushing the pace.  But considering my complete lack of fitness going in, I’m really impressed with how good I felt just drinking Tailwind, and I plan on doing the same thing for my next race.
Apparently a lot of our customers have had similar experiences, because we can’t hardly keep the stuff on the shelf.  Every flavor seems popular, and every time we re-order we seem to increase our order size by 50%.

Dave and Brad are also fans of the Tailwind, but they were supplementing with more other foods, such as bananas and baked potatoes.

The weather held out, and we had a great time putting in laps under the February Texas sun.

We finished lap 5, and decided to head out for a final 6th lap as the sun was setting.  I think we all had enough in us to do 7 laps, but it would have been spent entirely out of the fun zone and in the suffering zone, which is a hard place to convince myself to go lately.  And there were beers waiting.

So we finished up lap 6 at around 7pm, promptly packed up the car, and headed out in search of a hot shower and a good restaurant.

It was a great weekend, and I hope to make it out again next year.