30 Nov An assortment of amusing fodder….

Posted at 01:00h in Uncategorized by The Bikeworks Crew

Even though it is November, we still have some stuff and some things to report on.

Danny hit up the two day cross race in Las Cruces last weekend, and managed to take the win on Sunday in the masters race.  Good work Danny.  It was a muddy weekend, as proven by his bike post race.. 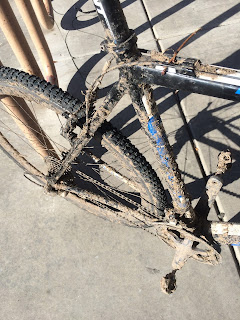 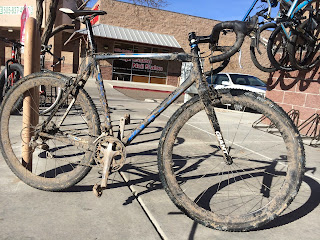 Earlier today, our good friend and potter extraordinaire Richaround brought us a new tip jar, which is, how do you say…. bad to the bone… 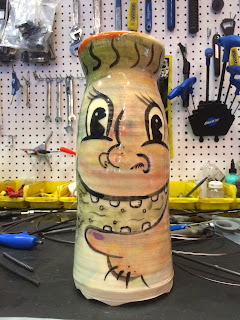 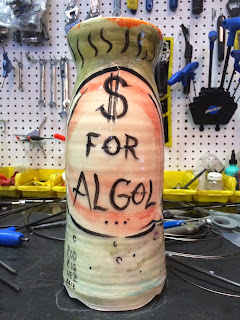 What is “Algol” you may be asking? Have a few strong drinks, then say it out loud, it will all make sense.

I (Lucero) spent the better part of last week in Colorado Springs attending the Sram Technical University, a three day hands on clinic of all things Rock Shox, Sram, and Avid.  It was time well spent, something I’ve wanted to do for a few years now.  I learned a lot of useful tips and tricks, which I can share with the other guys here and we will be that much betterer at fixing your bikes.

When we started Sram school they told us no photos in the building, because it houses their R&D and all prototypes and such.  But I ignored them and took photos of Herbold’s old race bikes that they had sitting around… 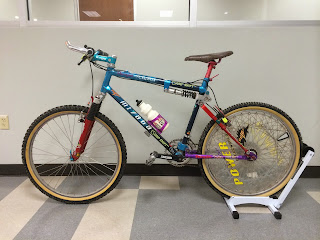 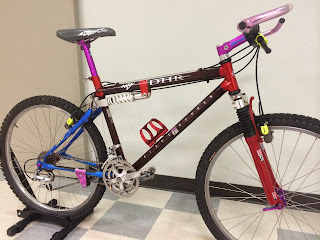 I told everybody that I found one of these at Goodwill for $10, and people freaked out. I felt bad, but it was funny.

Hmmm, other news… In keeping with our MO of lots and lots of demo bikes, we have a few new demo bikes in. 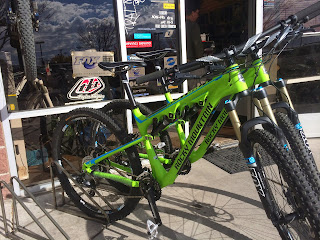 The Rocky Mountain Instinct 29er, in carbon, and a love it or hate it green of some hue.  I personally love it.

And the new Turner Flux 27.5.  120mm of made in America, DW Link tuned goodness.  Our demo has their Expert Build Kit, with XT components, and a very reasonable MSRP of $5195.

Last but not least, I had a fun time riding in the Bosque last weekend, with the previously mentioned Richaround. We happened upon a whimsical road sign post, which made me happy so we took a pic. 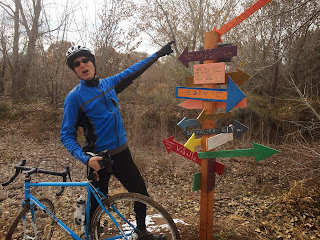 All right, that’s all I have for now. Til next time…