Posted at 04:14h in Uncategorized by The Bikeworks Crew

This past weekend we adjourned to Ruidoso for the 3rd annual running of the 12 Hours in the Wild West.  It was a weekend of bikes, booze, and gastronomic distress that will be remembered for some time to come.

With the addition of Wesleyton to the Bikeworks roster, Danny and I realized that we could now leave for a race together and keep the shop open simultaneously.  So we planned to do just that, and skipped out of work early on Friday evening with Chuckles.

It was quite a revelation to have 2 employees who were capable of running our store without us, and I left town with spirits high, finally feeling like a boss.


The second part of our plan (part one was racing and not working) was to bring our newly acquired Pugsleys to race on.  This was surely a win-win decision, as no matter how slow we inevitably rode there would be an excuse, and if by some odd chance we actually did well then we would be like superheros.  And furthermore, being the only 2 idiots riding fat bikes during a 12 Hour race in the Southwest is a surefire way to get loads of attention, and I’m nothing if not a great big attention whore.

Our plan was complete, and infallible.  The minivan was loaded to the gills with fatbikes, beer, pb&j’s, and 3 overly excited man-childs.  What could go wrong?

We are lucky enough to have a place to crash in Ruidoso, it is a cabin/house that belongs in some way Paul “Taco Truck” Trotman.  The best thing about the cabin is that not a shred of decorations have changed in forever.  Take for instance, the carpet…. 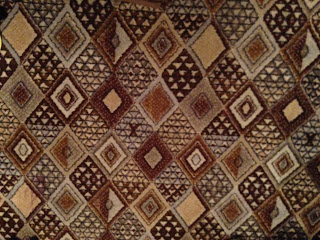 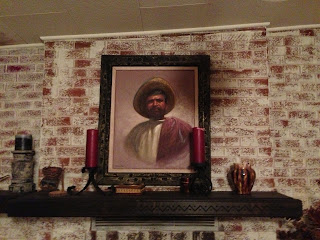 The place just oozes with “lets get drunk” atmosphere, so we did just that, and began to prepare for tomorrow race in the only way we know how; carbo loading with beer. 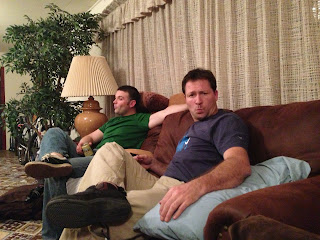 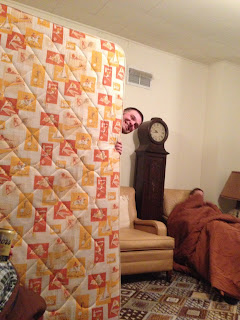 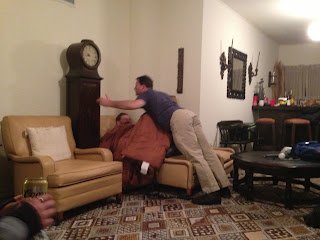 (No rest for Red Monkey)
After an incredibly greasy bar-food dinner in a place that thousands of Texas fratboys have undoubtedly gotten blackout drunk in, we were primed for a few hours of sleep and 12 hours of racing the next day.
The 5 am alarm clock belonging to Matt felt painfully early.  As I clomped around aimlessly waiting for Danny to make coffee, I watched Matt quickly and efficiently prepare himself for the race, and I realized that he 1) was taking this quite seriously and, 2) didn’t drink as much as the rest of us.  Well played Matt.
The lot of us left the cabin together around 6am, as the race was about a 25 minute drive and the start was at 7am.  However, Danny, Chuckles and I didn’t quite feel the need to show up on time, as there was a zero percent chance that we would be riding the full 12 hours anyway. We made the decision to find some breakfast and have a late start at the race.  This was a nice plan, except there are very few food choice in Ruidoso at 6am.  In the end I learned that Starbucks eggy breakfast sandwich things are kind of gross.
8am-ish, the three of us finally start our “race”.  We do our first lap together, slowly and painfully.  It’s 14 miles, 4 miles longer than previous years, and I’m pretty sure those additional 4 miles are all uphill.  The first 6 miles of the lap take an eternity, and I’m not even halfway finished with my first lap and wondering what I’m going to do the rest of the day when I quit after 2 laps.
Lap 2 actually goes quite well, we ride together again, and have sweat out a bit of booze, and are starting to feel alive.  Coming in from lap 2 we decide to eat a bit.  Danny slaps together some salami, prosciutto, and cheese sandwiches, which he and I share.  A little bit of bike prepping, and out we go for lap #3.
At some point during lap 3 Danny drops Chuckles and I. This is quite common, we don’t give it much thought.  When we finish the lap we find Danny at the car, feeling very sick, and looking like hell. 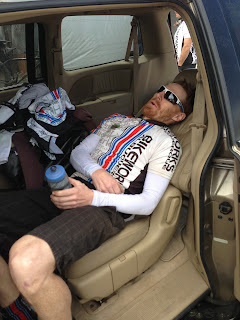 (Unhappy Red Monkey)
It turns out that Danny was going fast on lap #3 because he felt shitty, and Danny is a big believer in the mantra that if it hurts just go faster, because then the hurt will be over sooner.
While trying to offer some sympathy and care to vomiting Danny, I realized that I too was becoming a victim of gastronomic distress, and multiple times I scampered to the outhouse.  True to form, when Danny and I both eat something rotten, it comes back up on him and goes straight through me.  You might be surprised how often this has happened.
Eventually I was feeling quite empty, and headed out for lap #4, leaving Danny wallowing in misery back at the car.  Unfortunately, at about mile 3 my stomach flipped on me, and I knew immediately that I had ridden away from the outhouse prematurely.
By mile 4 I was getting anxious, standing up to pedal more, and starting to mentally inventory the soft, disposable things that were available to me.  Hmmm, I had some brand new sun blocking sleeves on my arms that I certainly could live without, but they were brand new, and I was really enjoying them.  Then there’s the old standby of using your sock, but I was wearing some really nice wool Swiftwick socks that I didn’t want to loose. I was quite displeased with my options, and was trying to just tough it out, but there was a long 10 more miles to go.  Then, eureka! I was wearing a Headsweats skull cap, totally a disposable item in such an emergency.  I told Chuckles to go on without me, and marched off the trail for what I like to call a “wilderness crazy shit”.
I march back onto the trail just as Matt passes by, he is now one whole lap ahead of me.  “Ride with me!” Matt calls out, and then he promptly hauls ass up hill out of sight.  At this time I am feeling better, but I’m still riding a fatbike, and each wheel weighs about 8lbs, and I’m not feeling that much better.  “If you want me to ride with you, then slow down asshole!” I call to him, but he didn’t hear me.
Back at camp.  4 laps in, rode off the hangover, powered through the diarrhea, I feel my race is successful and I’m ready to drink beer and call it a day.  Danny had rallied some time while I was out, and feeling better went out for his lap #4.  Then when I’m preparing to relax, Dr.Dave and Dr.Huser, my 2 best customers roll up on me and tell me to come along, we’re all going out for lap #5.  I couldn’t say no because a) they are my 2 best customers, and I try my best to suck up to them whenever possible, and b) they are both older than dirt, and there was no way I was going to let those two old guys do more laps than me.  So I slammed my beer and hesitantly headed out again on the Pugsley, which was feeling quite heavy by this time.
While I’m out on #5, Danny rolls in from #4. He doesn’t want to ride any more either, but there is no chance in hell he’s going to let me get more laps than him, no matter how much vomiting has taken place.  So he preps for a few minutes and heads out again, at about 5:15, allowing just enough time to finish a lap before the 7pm cutoff, at which point his lap won’t count.
My lap in uneventful, besides getting beat up on by Dr.Dave.  When I return I hear Danny is out on #5. At about 10 til 7 we start thinking that he should have made it back in by now.  And as 7pm comes and goes, we begin to get worried. Finally we ask somebody as they roll in at about 10 after, and they guy tells us that he saw somebody puking on the side of the trail. I believe there was a reference to “he sounded like he was making moose calls”.
Sure enough, Danny’s stomach gave up on him again, and with about 1 mile to go he had to pull over, get on his hands and knees (with one hand in a cactus), a do some loud angry trailside vomiting.
That’s about the end of the story.  Our buddy Matt won the bro-race and did 6 laps. Danny and I both did 5 laps, 70 miles, on the fatbikes, and despite the mishaps, enjoyed the bikes quite a bit. Taco Truck did 5 laps quite quickly, then called it quits. Chuckles did 4 laps on his brand new Devinci Atlas Carbon, and was quite pleased with his new bike.
The race was awesome, as always. The new longer course was much more challenging. The weather was perfect, and everybody seemed to have a great time.
We packed up our stuff, gave Danny a few minutes to gather himself, and hauled ass back to Turkey town.
Thanks Mike and Wesleyton for being so badass and running the shop while we play!
Bam! End of story.