Posted at 04:59h in Uncategorized by The Bikeworks Crew

Oh dang. I went and got a new bike. Here is a lousy picture of it.. 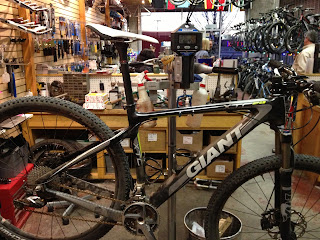 You may recognize it from the wall of our shop. It is the Giant XTC Composite (carpet fiber 29er) that we’ve had for about a year.  After hesitantly selling my Trance frame, I “needed” something to replace it and put to use all the good parts that were now lying around.

So, since the XTC wasn’t selling, and I’ve never had a carpet fiber 29er hardtail with gears, this one became mine.

But the real story is the cranks.  If you look closely at the picture above you will see that my bike weighed 22lb 15oz, and that was with an XTR triple crankset, an XT front derailleur, and an XT front shifter.

In the next picture, you will see my same bike, in another bad photo… 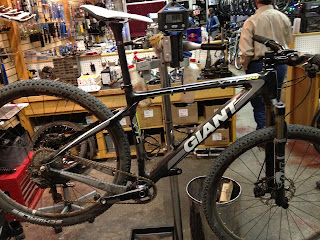 In this photo the bike is built with Sram’s brand spanky new XX1 single ring crankset, that uses voodoo to allow use of a 1×10 (or 1×9 or 1×11) drivetrain without using a chainguide up front.  (In case you never learned the hard way, you really couldn’t get away with this previously, as the chain would inevitably come off the chainring.)

The other part of the story is the weight savings.  With an XT shifter, XT front derailleur, and XTR crank traded out for the XX1 crankset the bike lost exactly 1 pound. This was much more than I was anticipating.

The other other part of the story is that I did not use the entire XX1 group. With an XTR Shadow plus rear derailleur, and a KMC 10spd chain, this setup has worked flawlessly so far.  Now I have only ridden it a couple of times, but I would suspect that if this wasn’t going to work well, I would have found out just a few minutes into the first ride.

So, that’s an easy pound of weight savings for $285 (MSRP on the XX1 cranks). That’s assuming that you don’t mind loosing some gear ratio, and that you can get your hands on a set of these cranks (I hear bike shop rats have been buying them all up for themselves).   If you are already running a single ring setup with a chain guide of some sort, this is a sweet upgrade that can save some weight and eliminate your noisy, inefficient chain guide.

And lastly, in case you are wondering, the bike is a blast. Under 22 pounds with sealant (no pedals), it’s almost enough to make me feel like I have some fitness because going up hills just got a lot easier than it has been in a while.

So there you have it, and incredibly dorked out post that may get a few very big bike nerds of a certain type excited, and will likely be absolute nonsense to most everybody else in the world. Thanks for reading!