Posted at 04:35h in rides by The Bikeworks Crew

I have been noticing some trends this winter, and thought I’d pass on some advice, even though you didn’t ask.

Firstly, Stans sealant doesn’t seem to work as well when it’s cold out. I’m going to pick a number, and say that around 40 deg. and below it looses some effectiveness.
Secondly, a whole lot of people who are mountain biking with tubeless tires (which should be everybody) haven’t checked the sealant in their tires since the late summer.
Thirdly, you haven’t had a flat in a while, a long while, on the trail because you are wise and ride tubeless. However, that spare tube that has been kicking around in your pack is now useless. It has worn through along the sides where it is folded and stuffed into a pocket next to your multi-tool (or worse yet, packed tightly in a under-the-saddle bag).
Fourthly, that sweet new wheelset you just got has kind of deep rims, deep enough that your questionable spare tube’s valve stem barely protrudes out of the valve hole, leaving not quite enough valve stem to be grabbed by that questionable hand pump that you keep in your pack.

Fifthly, that mini pump in your pack kind of sucks (see “Fourthly”).

What do all these things add up to? A 20 something minute long flat change, in the dark, when it’s barely above freezing out. 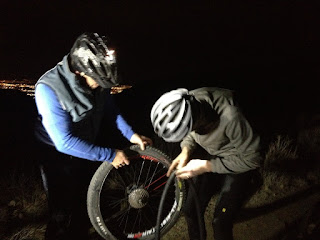 Danny learned not to get a bunch of sealant inside of your glove during an epic flat fix when it’s freezing outside.  Apparently that makes for a cold hand. 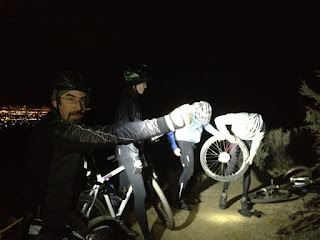 But everybody else was… 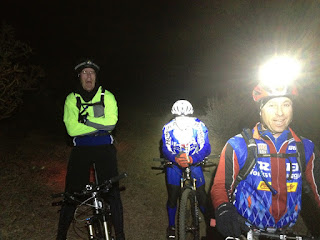 I learned that night riding shots with a camera phone don’t work so well.  But Kip Maloneythemaloneboneyponey assured me that if I had a really expensive camera my pics would have still sucked, and then I would break my camera as well. 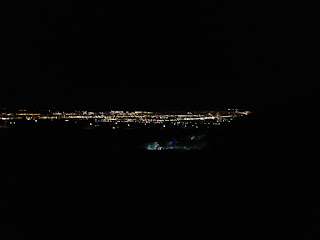 I also learned that I need to get my lights sorted out, as I started the ride with approximately 48,000 lumens of light power, and finished with just one lonely lumen of lighting.  My light was so dim it didn’t even reach to the end of the visor on my helmet.

Thursday night was a great time. We ended up with a crew of 8 riders (and one, just one useable spare tube between us).  Hope to get out for another night ride soon, and I will definitely let everybody know when.

That’s all, there’s a box of wine and some bad television calling my name.  Yeah, I keep it pretty classy.