Posted at 05:24h in awesomeness by The Bikeworks Crew

There are a lot of bike shops in Albuquerque. Some of them are pretty cool.  But of course, they aren’t “I wanna get married in that shop” cool… 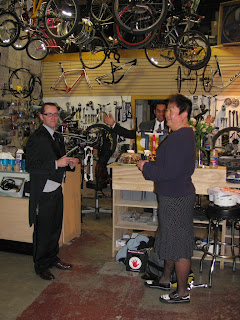 Booya! We had a wedding in our shop!
On Friday November 11th, shortly after closing time, Dan Morgan and Manda Lo exchanged vows, and became officially married for-realsies in Bikeworks!  There was a Marriage Certificate and everything!

Dan explained to us that our shop was the first place that he and Manda visited after moving to Albuquerque that they thought didn’t totally suck, and maybe made them feel like they were going to be okay living here.  I take that as a pretty awesome compliment, because Dan and Manda are awesome people.  They moved here from Minneapolis, and are total bike nerds.  Minneapolis has an amazing bike culture/scene, as well as a ton of really cool shops. So if our shop makes them feel at home, I am again very complimented.

So, they were married by this guy: 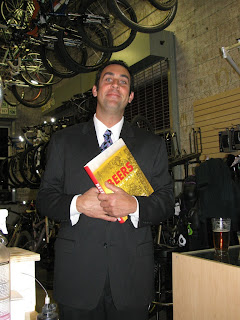 and he was also awesome! He is an ordained minister of Dudeism.  You know, as in The Dude from The Big Lebowski. The vows were loving, thoughtful, and hilarious, and included yelling at each other about having a rashes on their asses so bad that they cant even sit down (I’m assuming you’ve seen the movie).  Then Dan and Manda exchanged giant candy rings. 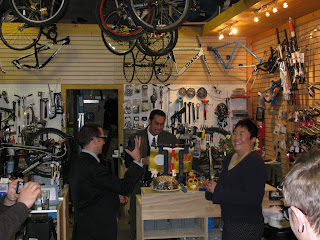 (pic of Dan, mid vow, shaking his hands angrily and yelling about the rash on his ass)

Then the marriage certificate was signed: 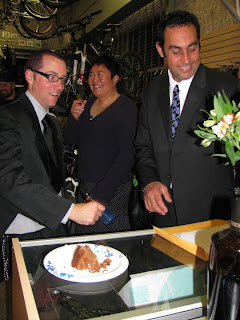 While the marriage certificate was being filled out, Mike chimed in and suggested that the location of the marriage should be listed as : Albuquerque (Bikeworks).  And that seemed like a good idea to everybody, and so it was.

Then we all celebrated with White Russians, and fun was had by all.
I poured beers for the merry wedding goers until the keg ran dry. 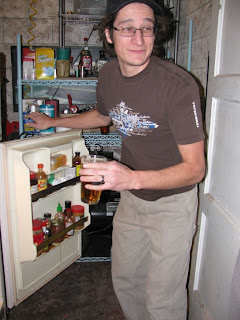 And I wasn’t completely hammered when that pic was taken. I believe my eyes are just bloodshot from the tears of joy. Joy and beer and White Russians.

And people hung out and enjoyed themselves, and Mike climbed around taking pics that I think make the shop look really good: 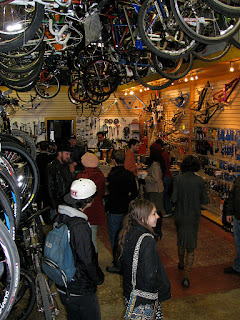 And then Danny got upset that there wasn’t any dancing. So he was all “screw it, I’ll just dance with my bike!” And then Dan saw Danny dancing with his bike all lonely, and said “ah hell nah, there ain’t going to be no lonely dancing at my wedding!” So he went over to Danny, and busted a move, and it was beautiful: 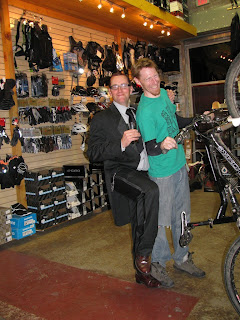 At least that’s what I like to imagine is going on in this photo.

But due to our ill-preparedness, the keg did run dry after a short time, so the wedding moved along over to La Cumbre, where there was no worry of running out of beer.

It was a great time, and we are so flattered that Dan and Manda wanted to get married in our shop.

So thank you Dan and Manda, it was an honor and a blast, and we wish you the best in your future life together.