Posted at 01:07h in awesomeness by bikeworks505

I was gifted a 2004 Maverick ML7 recently, from a very generous man known as Balls-r-hairy (or Big-silly-hair, if you want to be PG). So I built it up with an XTR 8 spd groupo that I am currently in the process of stealing from Charlie. I also put some carbon DT Swiss XR1350 wheels on it, and an X-Fusion Velvet fork, so that I could try this new uber bargain fork for myself.

I rode the bike for the first time this morning on a little Tunnel-Otero loop. That bike goes uphill like nobody’s business. It’s amazing how well the original Maverick frame has aged. Not only does it still look great, and the shock works perfectly, and the pivots don’t make a squeak, but the bike can hold its own against any suspension design that has come about in the past 8 years since it was built. I’m enthused. And 8 speed XTR with a rapid rise rear der. is just good old fashioned fun. A bunch of stuff I couldn’t afford when it was new, is fun to have now to play with.
Oh yeah, the bike weighs under 26lbs with pedals, and tires, and stans in the tires, and a saddle, all those other parts that you need for riding a bike but are typically left out when weighing bikes.

Just came across this blog:

I’ve only spent a short time reading it, but I’m entertained. I found it from the Ritte Racing blog:

I think Ritte quite possibly had the best looking bike at Interbike this year: 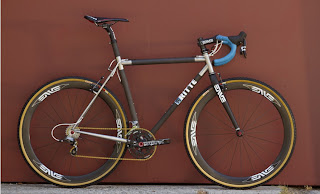 Oh, whats that? They are currently opening dealers? Hmmmm….

We’ve been hooked on this video lately:

Un-freaking-real. I also dig the song, which is a band I hadn’t heard of, probably because I haven’t paid any attention to new music since about the day my first boy was born.

Danny and I are excited to go and terrorize the Day of the Tread century on October 16th on the tandem. It was fun last year, and I’m guessing it’ll be fun again this year. You should check it out, if you’re akin to the skinny tire type of bicycle riding.

Also, please, try to keep it real out there folks.