17 Feb One more weekend of racing down the drain….

Posted at 18:44h in race review by The Bikeworks Crew

Well, we’re back in the shop after another weekend of shutting down and racing bikes.

Danny and I finished 7th in the mens Duo at 24 Hours of Old Pueblo.  One place lower than last year.  Didn’t quite perform as well as we had hoped.  At around 8:30 or 9 in the morning, we were both completely cooked and called it quits.  At that time we were comfortably sitting in 3rd place.  Unfortunately, the allure of standing on the podium wasn’t quite strong enough to overcome the pain from some serious saddle sores that developed on lap eight, in case you were wondering.

The success story of the weekend was Bikeworks’ racer Scott Spangler, and his 2nd place finish in the men Duo. 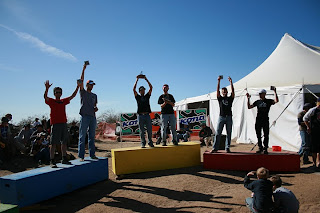 That’s him on the left, with his hand 14 feet up in the air.  After months of talking trash back and forth, Scott showed us up, putting in ten laps, while his partner got 9.

To peruse all the lap times and results, check here:
24 Hours of Old Pueblo Results Page

The race itself went pretty smooth.  We avoided any mechanicals or wrecks this year.  I almost hit a cow, which was a new one for me.

Tony’s race report was very succinct.  It turns out, not riding downhill bikes for several months is poor preparation for a downhill race.  On the positive side, he is now properly motivated to get trained and prepped for the upcoming season.
Furthermore, he has registered for Dawn ’til Dusk in April, so he’s got his first ever XC race to get ready for.

The positive side of Danny and I quitting the race early was that we were able to pack up, rest up, and get out of the race venue by 12:30.  We caffeinated and made the entire drive back to Abq, rolling into town at about 8pm, much to the delight of our wives.

On the way out of town, we were gassing up at a Circle K in Oracle, the closest town to the race venue.  While waiting for the worlds slowest gas pump to fill the tank, we were entertained by a gaggle of local Harley riding biker types.  I looked over at one guy just in time to watch him completely drop his bike on it’s side, from about 1 mph, sending both he and his wife tumbling to the ground.  He jumped up immediately (impressively quick for an older, very over weight guy) to try and lift his hog and investigate the damage.  Two other guys came running to his aide.  Eventually, once the bike had been put upright, one of the helpers happened to look over and notice that the guy’s wife was still laying on the ground, waving for help up.  He went over and helped her up, she limped around a little, but it seemed she was okay.  The husband had still not even looked over to check on his wife at this point, but was on his knees inspecting any damage to his ride.
Danny and I sat in our car watching in amazement.  Happy Valentines day honey!

Just as we were laughing about the whole scene, we heard a sudden spraying and splashing sound.  Turns out, not only had I found the slowest gas pump in America, I found one that does not automatically shut off.  Gas was every where.  Awesome.

Well, that’s about it.  If anybody has any cool pics from the race you want to share, please send em my way, over to bikeworksabq@gmail.com  I didn’t really take any photos the entire weekend.