Posted at 04:54h in awesomeness by The Bikeworks Crew

Well, I wish I had some trail conditions to tell you about, or some sweet winter-friendly singletrack that I just discovered.  But I just got on the bike today for the first time since last Monday, and it was the road bike (not that there’s anything wrong with that).
So road conditions report: Cold, and asphalty.
Not even a particularly eventful road ride, aside from the fact that Charles in charge was with us, which almost never happens on the road.

Have you ever noticed how hard it is to look cool on a mountain bike?  For example, a friend takes a picture of you doing something pretty difficult, then you see the picture, and it just looks completely wimpy.

It kind of gives you a little more respect for the hucksters you see on DVD’s, who can actually do stuff big enough to look good on film or print. 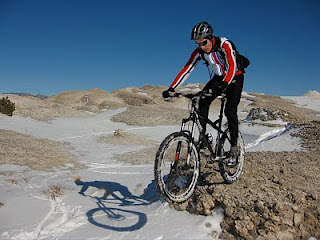 Yeah, the radness in the above photo is barely perceptible, but I’m not going to lie, It was a slight pucker moment for me.

At least I look good when posing: 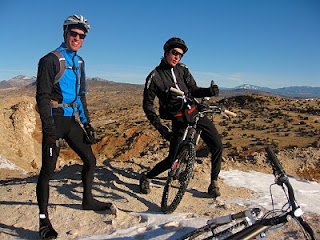 Better than Marc, anyway, just standing there all floppy armed, smiling at the camera like a dummy.

Danny and I are both anxiously watching 24 Hours in the Old Pueblo rapidly approach.  I have to say, I haven’t seen or felt the buzz about the race this year as I have the previous couple years.  Usually by now I would be talking about gear choice and race strategy with customers on a daily basis.  This year, I haven’t hardly heard a peep.
I think it’s still going to be a huge turnout, as usual.  The solo category has been full since early October.  It just seems that maybe there aren’t as many Albuquerqueians heading out this year.
Maybe I’m wrong. Maybe the buzz just hasn’t quite hit yet.
No matter how many of us are out there, one thing is for sure, I’m going to be in the pain cave in a big way.  I think Danny and I are both feeling less prepared than we did last year.  Once again, that might just be my imagination,  but I seem to recall numerous “training” rides from last winter.  This winter, all I can seem to remember are the bottles of tequila from Christmas, and the fact that we have a keg of Gordons at the shop right now.
If you’ve never had a pint of Gordons, I’d recommend stopping by, probably sooner than later.  I’d suggest riding your bike over, as this seems to be the sleeper of all beers.

Here’s one more pic, featuring my sweet ass, while I  shred gnar on my hardcore hardtail: 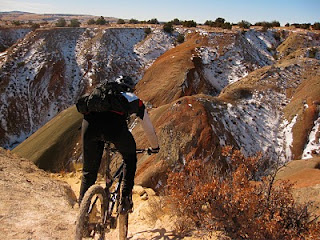 Yeah, I know, Charlie tells me all the time, ” you better make sure you never go to prison.”  It’s a blessing and a curse having an ass so sweet.