Posted at 05:08h in awesomeness by The Bikeworks Crew 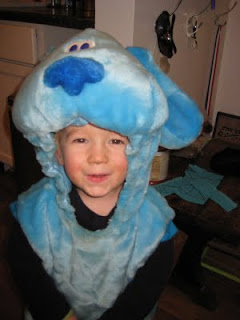 This weekend turned out to be a good one for getting some riding in.
We are taking full advantage of the busy summer months being behind us, and sneaking out of the shop for some extra riding whenever possible.

Sunday there was a cross race at the Bosque School, a private high school down in the Busque near Montano. So Saturday Danny and I played hookey for the first couple hours of work while we rode down to check out the terrain and get some miles in on the cross bikes. It was a great time, we managed to ride on dirt ditch paths pretty much the whole way from Menaul and Edith, all the way to the school. I wasn’t aware of any of the paths we took, and they were a great way to get across town on a cyclocross bike.

We poked around the school grounds for a little while, generally just checking out the place. The course wasn’t marked yet, so we couldn’t practice or anything, but it let me get a little better idea about gearing choice, as my cross bike is set up single speed at the moment.
Then from the school, we crossed Montano at the river, and rode some great Bosque style singletrack north all the way to Paseo del Norte. Then we hopped back on to the bike path, and took the Northern Diversion Channel all the way back south to the shop.
It turned out to be a great little morning cross ride, with a very surprising amount of dirt miles achieved without getting out of the city at all. Nothing that would have been too thrilling on a proper mountain bike, but perfect for cross bike tomfoolery.

Then Sunday was the cross race down at the previously mentioned Bosque School. This was apparently #4 of the New Mexico Cyclocross Series. Race #5 of the series will be at the UNM North Golf Course. I’m excited.
We managed to get Charlie out to partake in his first cross race, as well as Marc, who, despite having a totally rad titanium Raleigh singlespeed cross bike, hadn’t done a cross race in “something like ten years.” That didn’t stop him from thoroughly dropping me halfway through the 3’s race though. Charlie told me the next day that he couldn’t remember the last time he breathed that hard, and was optimistic that all his post race phlegm hacking might have somewhat increased his lung capacity. Seems logical to me. I think Charlie is hooked, as he was talking about racing next weekend almost as soon as this race was finished.
The race was a blast, a very fun course through some very scenic terrain. The kids going to that high school are lucky, it is absolutely beautiful down there.

(this is where, if I were smart, I’d insert a few awesome pics from the cross race that my lovely wife could have theoretically take while spectating the event, you know, if I had thought to bring the camera along)

Sunday evening had me laying around the house, realizing that cross racing is a little abusive on the ol’ body. I was feeling the familiar hip soreness that I get after my bi-annual running excursions, as well as some knee pain (that I’m thinking is due to a too low saddle height), and some odd foot bruising and swelling, most likely from my less-than-graceful cross dismounts in my should-have-been-retired-long-ago Sidi’s from 2002. But, despite my better judgment and a slightly swollen knee, I made plans with Charlie to go play on our new bikes in the foothills on Monday.

I knew my knee was going to bother me, but I had been staring at my new bike (see previous post) all week, and it hadn’t seen dirt yet, and it was starting to make me a little anxious. So we met at the top of Montgomery for a good old fashioned north foothills loop.
I wondered as I drove north along Tramway, from I40 to Montgomery, how many hundreds of times I had made that drive to do this ride. It also occurred to me that going northbound on Tramway used to be much quicker. It seems as though the lights used to be timed, and you could pretty much just cruise at 50mph all the way. Now it seems that you catch the first 4 red lights absolutely no matter what. It’s like they are intentionally timed to make sure you can’t hit any greens. Is it just me, or did this not use to be the case?

Anyways, the ride was fantastic. I quickly figured out that gearing choice on a two-speed Hammerschmidt setup is tricky, With a 160% difference between the two gears up front, you either have a 24 or a 38 tooth chainring, effectively. This is a big difference. I built my bike with an 18t cog on back, and the result put me in no-mans land nearly the entire ride. I didn’t have the “gusto” that day to turn over the big gear, but dropping down to the easier gear was almost always too easy. It’s going to take some experimentation to get it just right. I’m thinking a 20t or even 21t in back will be the way to go.

I noticed a few other things during the ride. I have 30″ wide handlebars on my bike, which is significantly wider than anything I’ve ever ridden before. The trend in the DH world is definitely to run wider bars, but most those guys are running 29″ wide bars, with a few guys picking up the 30’s. I liked the bars, and figured I’d just trim them down eventually. Much to my surprise, once I got through the trail-head gate, I completely forgot about how absurdly wide my bars were for the entire ride. I did however, feel very confident on all the technical section, and was motivated to get “all trials-y” a couple of times. I think this was in part due to the nature of my new bike, but now I’m curious to see what some of my other bikes would feel like with these huge bars.
The awesome chainring clearance provided by the Hammerschmidt was also noticed, especially on one technical step up, and another time when I was getting “all trials-y”. There was that moment when you brace for the inevitable grinding of chainring on rock, and then… nothing, you were up and over without damage.
I had a blast pushing the limits of the bike through corners as well. There’s just something satisfying about the way you can corner on a hardtail, really controlling the rear tire with the pedals. I’ve never ridden a long-travel hardtail before, and the combination of the control a hardtail provides with the slack front end geometry, and huge tires, is really cool. Oh, and a 150mm travel Rock Shox Revelation U-Turn Air, is a hell of a fork.
I’m excited.

Charlie likes his bike too: 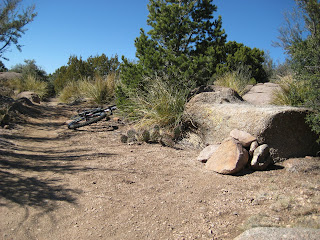 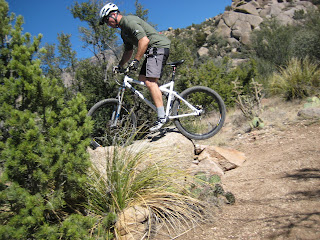 So, lastly, if anybody is still reading, we’re going to start back up with our weekly night rides from the shop. So next tuesday, come on out and join us. We’ll try to get out of the shop as close to 6pm as possible, usually on the bikes in the foothills at around 7. We now have a handfull of demo/loaner lights for people as well, after gearing up for the Burner: 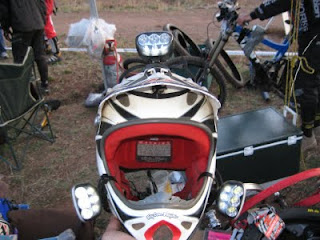 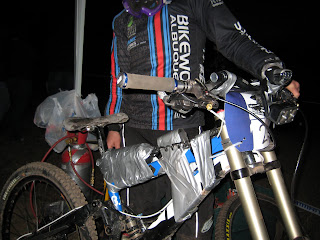 So those of you without lights can give it a shot, and then get hooked, and then buy some badass lights from us. Yeah, we’re employing drug dealer tactics, so what?

Dang, that was a lot of words to type. I haven’t written this much at once since college. And once again, my lap is melting from this lava-hot laptop. Time to go.