05 Nov Almost Happy Birthday to us!

Posted at 16:52h in awesomeness by The Bikeworks Crew

Next week, it will have been two years since we opened. Yayyy for us.
I came across these photos yesterday. I believe they were taken a day or two before our “grand” opening: 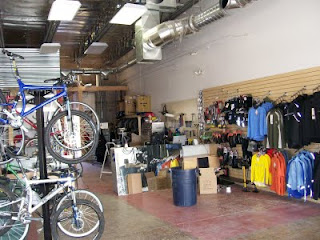 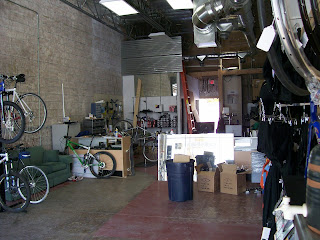 Things look a little different now. These pics help remind me of just how much work we’ve put into this place.

So, as a two year anniversary present to ourselves, it looks like we’re going to be picking up a Roller-racing setup:

In case you don’t know, the setup is basically stationary bike racing, on rollers, hooked up to a computer / television display, so you can keep track of time, speed, and who wins, etc.
I’m picturing these set up in the shop, at the Anodyne, at Marble Brewery, with copious amounts of drinking, lots of heckling, and maybe a little betting thrown in for the fun.
Good times.

We’re also starting conversations about a 2 year anniversary party. It will most likely take place a little after the actual date, but that will just give us more time to make it that much more awesome-er. Stay tuned.

Yesterday I continued this months trend of building badass hardtails; 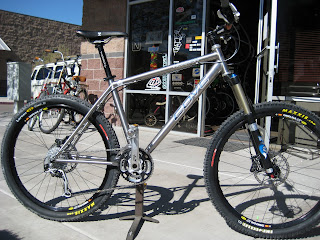 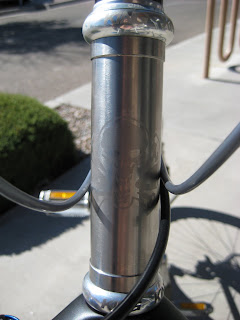 A titanium Cove Hummer, 140mm travel fork, hugely oversized shaped tubeset, a solid XT build kit, this bike is sweet. It was built as a special order, and has already left the shop unfortunately. But before it left, we bounced around the parking lot on it. It was one of those bikes you could immediately tell was going to ride really really nice on the trail, very light, springy and lively feeling.

And Tony continued the trend of building Evil’s: 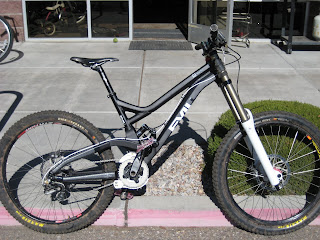 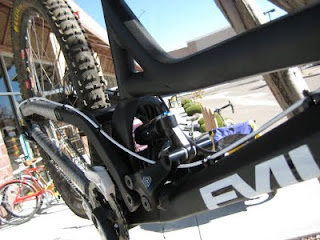 The Evil Revolt, their full on DH race rig. This is the first one we’ve actually built, with more coming soon (we’ve got two more frames in the shop, with at least a dozen guys drooling on them).
This bike has a suspension design by Dave Weigel (of DW Link fame), featuring his newest acronym, DELTA : Dave’s Extra Legitimate Travel Apparatus. Rad.

Tony also wants me to let it be known that we now have Freelap Timing systems in stock:

This is basically a watch and timing pole setup that can give you very accurate lap times, a must have for anybody trying to get faster on a bike on a given course. For example, you’re not sure if it’s faster to jump or manual a section on the BMX track? Dang, problem solved. Trying to figure out the hot line down one of our DH courses? Booya, it’s done.