Posted at 20:41h in awesomeness, race review, travel by The Bikeworks Crew

Wait.. what happened? Where did September go?

As you might have noticed, from our steady stream of announcements of not being open, this has been a whirlwind of a month for us.

But, we’ve gotten through the most of it, all the busy crazy-ness, and we’re back to business as usual.

Danny’s wedding was a treat for us all. 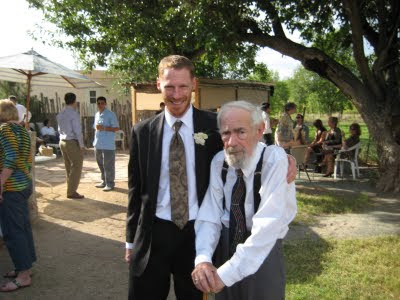 That’s a pic of Danny, as dressed up as you will ever see him, and his father.

Then Dan was off on a honeymoon for a few days, and shortly after his return, I took off to participate in the mayhem that was the 2009 Single Speed World Championship in Durango.

I did a poor job of documenting the fun, as all my pictures are from the Friday night before the race.

We stayed at the Durango Hometown Hostel, which was far nicer than we anticipated, and I would completely suggest it for anybody looking for inexpensive accomodations in Durango.

After unloading our bikes and dumping our bags, we quickly rode into town to find registration, with just one stop at the liquor store in between. 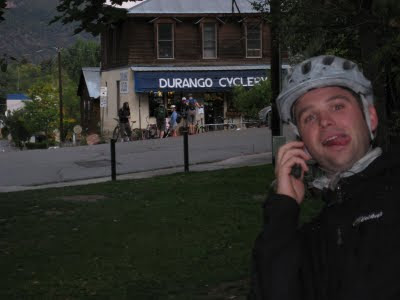 It rained, and we hid out like hobos in the park drinking. That’s a pic of Paul in front of Durango Cyclery, which is a cool shop definitely worth checking out while in town.

We went from visiting some friends of Rich’s (and getting fed pizza) to the official kegger in the woods party organized for the race via the “Test Tracks” trails, that run along the west edge of town. These trails are a blast, and it’s unbelievable that they are so close to town. If I lived in Durango I’d be finding excuses to head north/south across town on these every chance I got.

The pre-race party was huge. 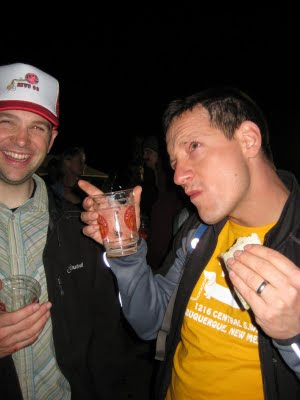 And food and beer was plentiful and cheap……. 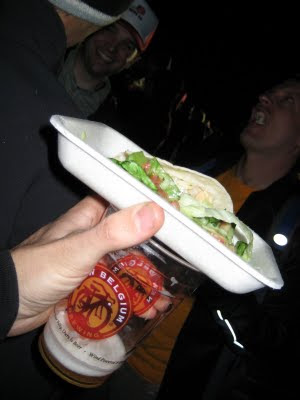 And live music to rock your face off to…. 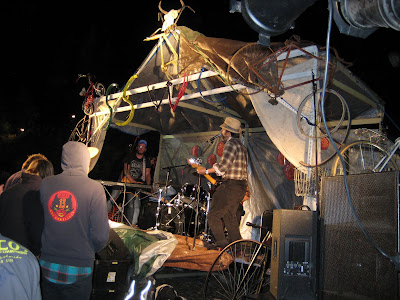 It was definitely a fun event. So much fun was had on friday night, that I didn’t manage to get my camera out for a single pic on Saturday. I was in rough shape, to say the least. I did manage to line up pretty far towards the front amongst the 1,000 plus other racers. And despite being incredibly hung over and wondering if I might throw up at any moment for the first half of the race, I actually raced well and held my position amongst the masses.
For the majority of the race I was working like hell to keep up with a local badass gal named Sarah ( I learned her name because absolutely every spectator knew her). She was battling with a couple other gals for 7th, 8th, 9th place or so, and I was caught in the middle of it. And it was sweet.

The race was 2 1/2 hours or so of punishment for me, and I loved every minute of it.

Here’s some links to some recaps of the race from people who didn’t forget about their cameras:

Article from Mountain Flyer Magazine (best bike mag ever, and also noticed editor Brian Riepe listed as a top 20 finisher in the race, which is bad ass).

Bike Snob NYC’s account of the event (Notice the guy in his pics with the blond hair wearing a “Bud” jersey? That’s Greg Herbold. So if we can get HB to remember who was behind him for the hike-a-bike, the Snobs secret identity will be totally foiled! Also, I totally finished in front of HB, and therefore also beat the Snob, you know, just so you know, because clearly he took the race very seriously).

After the race I was actually feeling pretty good, until I drank my finish line congratulatory beer, and then I felt absolutely miserable again. I needed to either not drink at all, or drink way more than one beer.

Then I was home for one day, and split again Monday morning for Interbike. We did two days of Dirt Demo, riding and abusing other peoples expensive bikes for a change, and one day at the show.

I’m not going to bore everybody with another “bike dorks trying to get their party on in vegas” story. Instead, I’m going to go ahead and pretend I am Stevil, and let you read his account of the event, because it’s way cooler than mine, and can’t actually get me in trouble….

All Hail the Black Market’s Stevil goes to Interbike and gets it done.

And if you want to know who reinvented the wheel with some unbelievable new doo-dangle, inevitably made of carbon, there’s plenty of places to go for that (because quite honestly, I didn’t hardly see a thing at the show, somebody was a little bleary-eyed):

and dont forget to check out Bikefix.net for coverage of the show, as Marc and Charlie will certainly have sifted through all the lameness and found something sweet to show you.

Okay, kiddo is bound to wake up soon, my lap is beginning to get warm from my new – used Macbook that I just picked up from Long (wicked photagrapher, but probably sold me a totally crap laptop, check out his site: http://longnguyenphotography.com , seriously, this thing is like lava), and also I have a special limited edition S.F. Brewing Yippee IPA bomber in the fridge that I’ve been working hard not to open since 12:01, but I think the time has come.

Thanks for reading. If you’s got any photos from SSWC or Vegas that you’d like to share with our little Bikeworks brethren, I’d be appreciative.