Posted at 21:04h in awesomeness, rides by The Bikeworks Crew
We had a celebratory “Bachelor” ride for Danny yesterday, as he will soon be taken off the list of Albuquerque’s most eligible redheaded bike nerd bachelors.
The ride was our local favorite, around the mountain (from town, out the low road to Bernalillo, through Placitas, up the dirt Las Huertas road, and back home through Cedar Crest and Tijeras).
There were seven of us in the end, J.F., Armijo, Guy, Brian, Brad, Danny and myself. Strangely, all seven of us forgot to bring water bottles, so we had to resort to drinking from flasks early on: 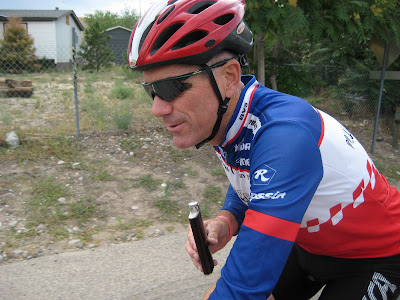 It was an overcast day though, so water didn’t seem all that necessary.
We pit-stopped at the Placitas grocery store for some supplies. 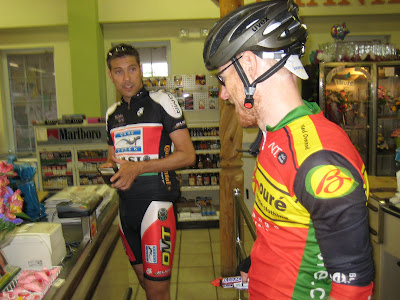 And eventually a potty break was needed, or course: 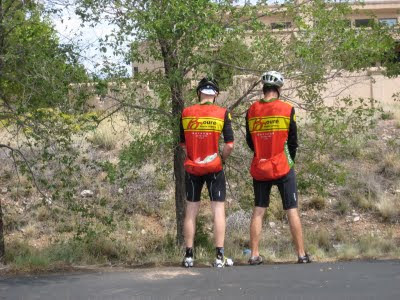 We got to the steep climb out of Placitas all in one piece and feeling a little punchy: 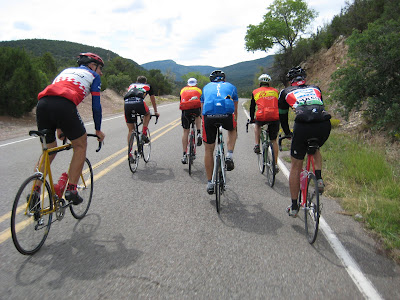 But the dirt road took some victims. 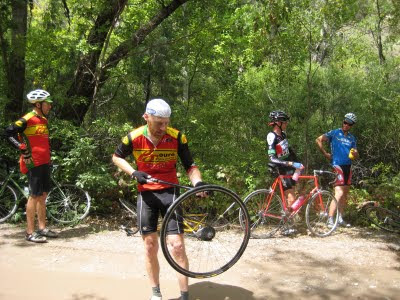 Thanks to some brilliant team work from Brad, all attacks from John “the climbing specialist” Armijo were foiled, and Swinton found victory across the top of the dirt road climb. Or at least I assume he did, but honestly they were already out of my sight at that point.
Once we all emerged victoriously onto the Crest road, Danny decided that the suffering had only just begun, and pointed us up to climb the rest of the road. That turned out to be quite painful, and our group mostly came undone as we all struggled up the hill in our own personal battles against gravity.
I was quickly questioning my food decisions (sweet roll, beef jerky, Twix) and beverage decisions (whiskey, tequila, Rock Star, and a little water) of the day. By the time I reached the top, I knew I wasn’t making it down without some food ( I was also questioning my decision not to bring any food), and took a pit stop in the little store at the top. I don’t think a Coke in the can has ever tasted so good, nor have I ever drunk one so quickly.
The crew graciously waited for me to consume my sugar and allow my head to stop spinning, so that they could graciously drop me one at a time on the way down. My road descending abilities are truly atrocious. But as I watched Guy pass me, going at least 10mph faster and drafting off a minivan through a corner, almost instantly shooting out of sight, I made myself feel better by deciding that I would beat them all down a technical section of singletrack. Pffff, roadies.
The next stop was Ribbs, because nothing goes with big road rides better than red meat and pitchers of beer.
Clearly, Danny hadn’t suffered nearly as much as me at this point: 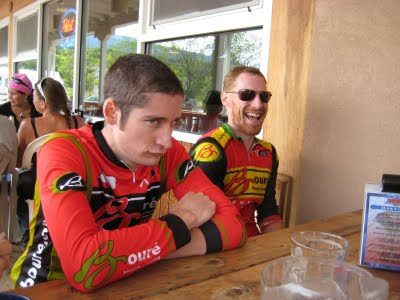 The food and beer was plentiful and delicious: 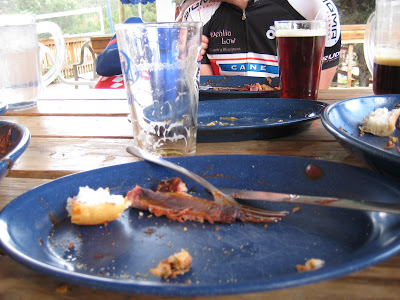 The company and conversation was perfect: 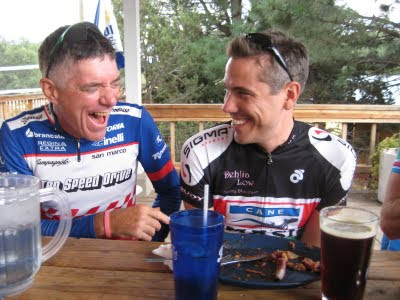 We feasted, and then slowly and heavily climbed back on our bikes to work our way back into town.
Heading west across town on the bike path, I started noticing the shadows were getting long: 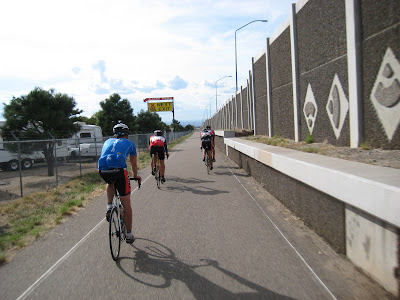 We had definitely been taking our sweet time, rolling back into Albuquerque probably somewhere around 5pm. I’m going to go ahead and blame our slow progress on all the flat tires.
It was getting late, but there was a couple more stops necessary: 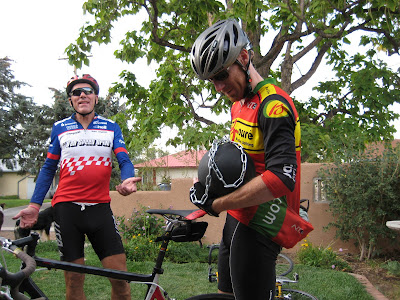 Danny was presented with the literal ball and chain, constructed by J.F. I didn’t pick it up, but it sure looked heavy.
Then he rode with it over to Guy’s, where it was handcuffed to his wrist: 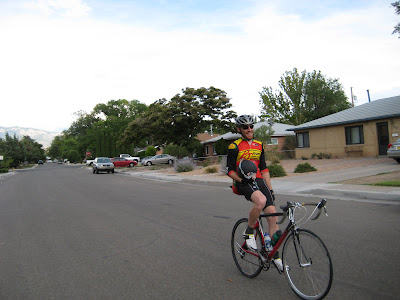 And then he had to ride the last leg of the journey, from campus area to downtown, holding this thing.
It was a great day.