Posted at 19:08h in race review, stuff by The Bikeworks Crew

I’ve been a delinquent updater once again.
Not a whole lot to talk about though.

Last weekend, Danny and I and our lil‘ families went up and race cross country in Taos. It was good times. It’s a very fun, and extremely hard course. Up some of the steepest dirt roads that I have ever seen. And some very tight single track up around 12,000 feet.

The course was very complicated, doubling back and crossing over itself a number of times, with a slightly different route for each of the three laps done after the big fire road climb.
Fortunately, it was extremely well organized, with a ton of volunteers to steer you in the right direction at every intersection, and everything ran smoothly.

Danny, true to form, pinched a tube, and then proceeded to blow up his chain. This worked well for me, because it slowed him down to the point where I could catch him. So we rode the final 1/3 of the race together, coming across the finish line as team Bikeworks.

My age group (19-29) was actually faster than Danny’s (30-39), which is unusual, and the same finishing time resulted in a 3rd place finish for Danny, and 4th place for me, in our respective age groups in expert (cat 1).

And then it was back to work with us. Our final week without Tony, Danny and I were certainly feeling a little worn down. The shop is just a little difficult to run with two guys.

I’ve procured a couple of new rides for the stable lately. First was a Swobo Crosby. 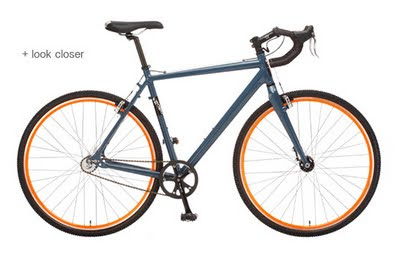 This bike is bad to the bone. The frame is nicer than I anticipated, with some details that you can’t really see on the picture. The downtube is six sided, with a huge interface with the head tube, and then is rotates and has a hug connection with the BB. A carbon fork that gives a much smoother ride than I anticipated. Sliding dropouts, disc capable, gearing capable, solid parts spec out of the box, and the most rad color scheme I’ve seen in a while. Even the tires are perfect for our foothills.
It also comes with the Sram Torpedo hub, which looks vaguely like a coaster brake hub, and can be converted between singlespeed or fixed gear with 5 turns of a small flathead screw. The screw sits inside of the axle, and is accessed via the driveside axle nut, which is open on the end.

I also just replaced my Soma Rush frame for another of the same, except this one is my size. Also, it’s white, and awesome, because white bikes are awesome.

If anyone is interested in a 55cm black track frame and fork, this thing is a beaut, and it’ll go for a good price.

And with that, I’m going to go pay bills on my day off, because it’ll be nice and quiet at the shop, and I haven’t paid bills in a number of weeks.