16 Dec Every Monday it Snows

Well, since I invented the “Monday Night Bikeworks Shop Ride” it has snowed 100% of the time during our scheduled ride.
Last Monday Tony and I toughed it out, as it wasn’t a legitimate snowfall.
But today was as legitimate a snowfall as we see in Albuquerque, except of course the storm that rolled through on Dec 29th two years ago, when it dumped over a foot all over town, which also happened to be my wedding day, which made things interesting.
So basically when I plan things, it snows. Lucky for us I’m not big into planning things, or we’d never get to ride our bikes.
Anyway, we elected to opt-out of the ride tonight. I’m assuming/hoping that those who had expressed interest also bailed as well, because it didn’t seem like a good night to be up in the hills.

Not surprisingly on such a stormy day, things were slow at the shop. I had a chance to build a couple of bikes, such as the long awaited Rocky Mountain Hammer, a 29er singlespeed made of Reynolds 725 tubing, and very very good looking. 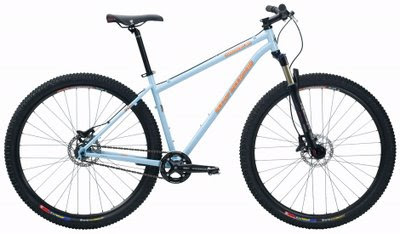 It looks better in person than this stock photo does. I didn’t expect to like the baby blue / orange paint scheme as much as I do, but now I’m trying to come up with an excuse to own two steel singlespeed twentyniners.
This bike goes for $1600, is well spec’d and trail worthy out of the box, and a great way to get into 29er, or singlespeeding, or best yet, singlespeeding on 29ers, which I’ve recently learned is oh so fun.

We also got in a Giant TCX 01, that I ordered impulsively and which may or may not be my size. 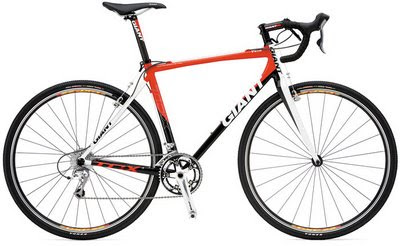 We’ve been hearing rumors of a second ‘Cross series being organized in Abq. If this does happen, and this beauty of a bike is still in the shop, I’m afraid I might just have to take it out and show it a good time. You know, because I really need another bike.
Much like the Rocky, this bike is better looking in person than this photo makes it seem. The tubing is impressively shaped throughout the bike, and the paint job and color scheme just do it for me. Also, with a 105 drivetrain, weighing just over 20lbs out of the box, and at $1400 retail, this bike is a screaming deal.