Posted at 02:20h in awesomeness, travel by bikeworks505 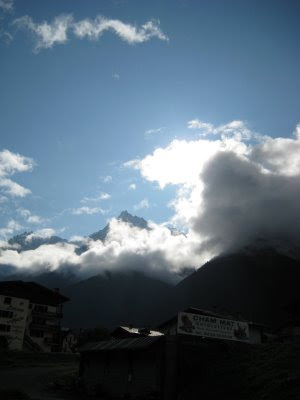 Here’s some more photos from our Euro trip. Funny, it seems like that trip was a lifetime ago, but I’ve been asked numerous times the past couple days how it went, and then I realize it was only a few weeks ago, and I haven’t seen said person in a month.

Day three we took the hour or so drive to Chamonix. We were very excited to have a sunny forecast after our first two days being rather overcast and wet.

The drive gave some awesome views of Mont Blanc peaking out behind the clouds every little while. 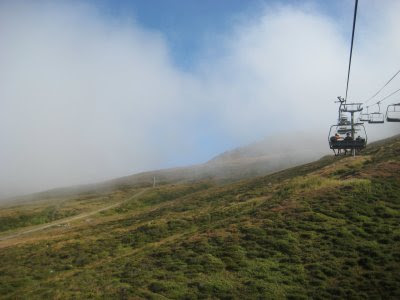 We drove to a little area just outside of the town of Chamonix, which I forget the name of. From there, we hopped a gondola, then a chairlift, and made our way to the top of a mountain. 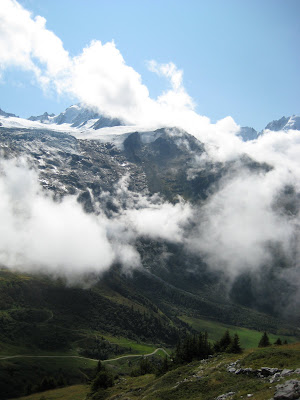 The views from the top were, how do you say, ah yes, very nice. 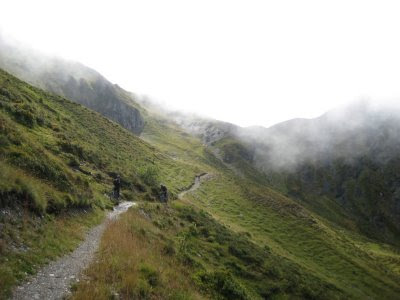 The biking was also very nice, as they say. The trails consisted of singletrack, the type dreams are made of, that generally pointed downward with a nice gradient, for thousands of feet at a time. Of course the whole time there were views of small towns, Mont Blanc, and a glacier to keep you distracted. 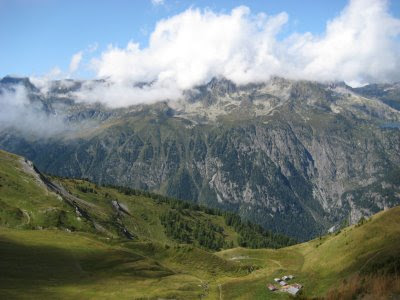 Although the trails were some of the most fun I have ridden in my life, we couldn’t simply just rip down the mountain. The views were too overwhelming, and forced us all to stop regularly for photo ops. 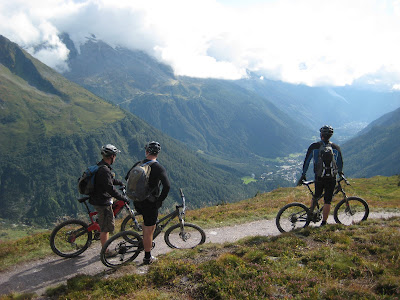 We rode up the gondola and ski lift three times that day. Each time at the top there was a fairly mild climb to get you to the singletrack. We went down the face of the mountain which the lifts went up twice. The trail was fantastic and flowly, and ended with the most unbelievably fun set of switchbacks I have ever been on. We did that trail twice, and I think I became a better mountain biker because of it.

We also went up and over the back of the peak once. That gave us another unbelievably fun descent on a slightly off camber singletrack with views of a glacier, then dumped us into some steep and very techy stuff which led us all the way out into a valley. We had a short road ride back to the nearest town, and then hopped on a train and returned back to our starting point.
The train only technically allowed 4 passengers at a time, and there were seven of us. When the lady came by to give us trouble, Gareth our fearless guide explained to her, in French, that there were just five of us, and two were actually quite small, so it was okay. That was good enough for her. Then we didn’t have to pay for the train ride some how, and that, my friend, is the benefit of hiring a tour guide.

We finished the day by riding back to Chamonix along a rolling, rooty, rocky cross country trail that followed a small river. The trail was a blast, with no shortage of things to jump over and off of. There were a couple of very loose and techy, steep climbs along that trail. Gareth was leading, with all four of us following on our Mavericks. At the top of each techy climb, I noticed Gareth looking back, and seeming a bit surprised to see us all there with him. He later told me that most people don’t usually make those climbs, and that he was beginning to think that maybe there was something to these Mavericks after all (the guides were all Maverick skeptical when we arrived). To that I replied “yes, the bikes are, how do you say, ah yes, very nice.”

We were all very thoroughly excited, and eventually agreed it was one of, if not the single best day of mountain biking we had ever had.
Such an occasion of course called for a beer. 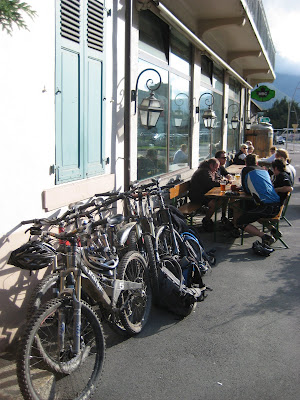 We found a Canadian themed microbrew in Chamonix, and I was able to drink the closest thing to an IPA I was to find the entire trip. We then had nachos, and for nachos in France at a Canadian themed restraunt, I was quite impressed. The copious amounts of paprika was a bit odd, but I was starving and it didn’t phase me one bit.

From there, we had more beers, and then an extremely loud drive back, overpowered with drunk and excited political conversations by the drunk Americans in the back, while our gracious guides undoubtedly wished they had brought ear plugs.