Posted at 00:09h in awesomeness, stuff by The Bikeworks Crew

Its been almost a month since I put anything up on our site. Wow, I am negligent. I should remove the post date so it’s not so obvious.
My only excuse is that the shop has been busier than ever. June was by far our busiest month to date, and we nearly doubled sales in July. If we’re not careful, we’re going to find ourselves employers soon, and that’s a whole other can of worms. It’s definitely an exciting problem to have.

Just found out about a cool online shop, Velo Orange, thanks to Richaround. He was trying to help me style out my newest bike acquisition, which is his old 1984 Stumpjumper, which he got new in 1985. It was already sans-paint, so now it is in the process of getting powder coated “extreme chrome”, and then it will be built up with many original parts to become my new ultimate commuter / baby towing machine. I really wouldn’t consider it as a regular commuter, except my commute is under three miles long, so really any bike becomes a good candidate for a commuter.

If your building up a dedicated baby trailer towing bike, does it indicate that maybe you’re approaching having too many bikes?

I’ve also built up a few other bikes recently, speaking of too many bikes. I finally got around to re-building up der Fusion, my obscure German freeride machine. Don’t actually know too much about the bike, as my German is limited to “a pint of beer please” (learned while in Munich, essential when in a beer hall) and “where is my underwear” (learned prior to my visit to Germany from my wife, who studied German in highschool, and wanted me prepared for the trip).
I believe it is a 6.5″ travel bike, and they are handmade in Germany, and they don’t have any US distribution, but they do have some sponsored world cup DH racers, and they seem to be pretty sweet bikes.

I finally got motivated to reassemble der Fusion because I had decided to head up to Pajarito a couple weekends ago to ride the lifts. I had been hearing about how many fun trails had been built up there, and I decided it was irresponsible of me, as a local shop owner, not to go check it out and show my support. It was a blast, there are plenty of trails to keep you entertained, enough stuff to scare your self on (or to be scared of and not do, as was generally my case). They are very enthusiastic up there, embracing the downhill and freeride scene, and plan on building more and more trails. There was quite a few riders on Sunday, and I hear Saturday is substantially busier. Everybody was friendly, no douche bag attitudes, and everybody sat around in the parking lot after the lift stop for a beer. In general, I’m very happy I went, and now I’m all fired up to go ride some big bikes some more.

To go along with my new big bike riding enthusiasm, I’ve been doing a little bit of shopping, you know, for safety gear. Most recently, I got a sweet new full face from 661. 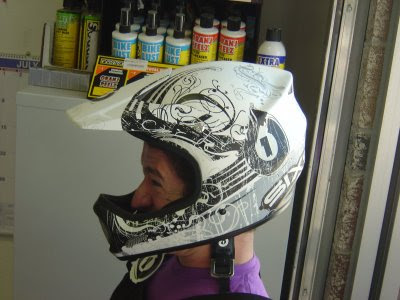 That’s my “holy cow I’m totally going so fast … ohh f@#k!” face. It’s good to practice these things so you can get it right when the time comes.

I also got a new singlespeed frame, one that I can finally run discs with. I acquired an On One Scandal 26. The frame was on closeout from one of our distributors, so I snatched it up in a hurry. It’s sweet, I’ve always been a fan of Scandium frames, and it has a nice long (24.4 in) top tube, which is a welcome chance after so many bikes that were too small for me (a bad habit that took me several bikes to break). Of course, I shouldn’t be talking it up too much, as we don’t have any for sale in the shop, and rumor is the US importer isn’t going to be importing any more (hence the closeout pricing). So we’ll just leave it at that.

The following picture accomplishes two things at once. 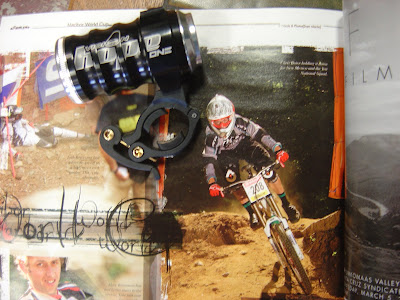 Here you see a very cool, small, light and bright Hope light that I know none of the specs of, but Charlie just bought it and is excited about it and it’s cool so here it is anyways, sitting on top of a picture in the current issue of Decline of local fast guy Chris Boice, who is a pro on the Yeti national team and good friend of ours who likes to come into our shop, grind things for hours with the dremel (something I’ve found most downhillers to be fond of), let his dog puke the most rancid dog puke anybody has ever smelled all over the sales floor, and yet we still like him.

Way to go Chris, it’s fun seeing people you know in magazines that you read.

Of course, no post would be complete without a plug or a link to Bikefix.net. There’s some new stuff on there about nice but too short Endura shorts (we agree, and so does our new rep, so maybe they’ll change in the near future) as well as a write up about Mary from Siren bikes, who recently became the first woman to race the entire length of the Great Divide Mountain Bike Race. But most importantly, he finally did a review of the Maverick Durance, which we all know is the most superior trail bike available today. Marc agrees, and fortunately is eloquent enough to put it’s pure awesomeness into words without resorting to use of grammatically questionable words such as “awesomeness”.

And last but not least, we had sad news today as we found out that my old Pinarello cross bike died a sad death at the hands of a stupid car with a presumably stupid person behind the wheel (in our shop, you’re presumably stupid until proven un-stupid when you go about running your car into bicyclists). 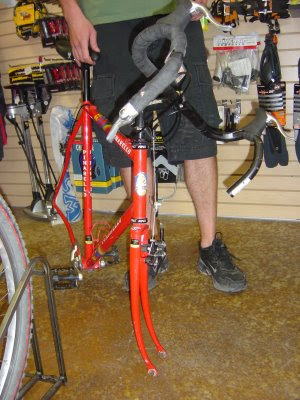 Fortunately, our friend and current owner of the late Pinarello came out relatively unscathed (relative to how the bike faired). The bike is bent in more than a few directions, without much hope of being straightened. I’m particularly impressed with the stem, which is bent in a way none of have ever seen a stem bend before. I guess that’s a testament to the toughness of the Salsa CroMoto quill stem. You can rest assured that thing is never going to shear on you. Farewell Pinarello, I will miss your flamboyantly Italian rainbow dotted painjob.

And that’s about what I’m good for tonight. Hopefully it won’t be another 28 days before I get around to putting up another post. I actually intend to start a running list, with pictures, on the site that will show all the used bikes and major components we have for sale at the moment, which will be updated on a very irregular basis.

Thanks to everybody who has been coming around. We’re thrilled about the customer base we’ve built so far, and we’ve been very busy largely because of all the positive word of mouth. It’s starting to look like this whole “owning a bike shop” thing might work out.