Posted at 17:25h in rides, travel by The Bikeworks Crew

We spent yesterday riding. All day. The ride was Elliot Barker to South Boundary to Taos. We got shuttled by the local bike shop shuttle service, and were dropped off at Pablo Flashado (pretty sure I’m spelling that wrong) which is the high point between Angel Fire and Taos.
From there we hopped a fence, got onto Elliot Barker trail, and proceeded to ride for the next seven hours or so. 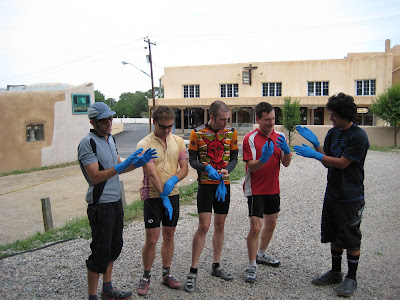 In this photo, you can see our favorite doc Dave explaining the proper way to put on medical gloves, in case we needed to operate on the trail.

We were riding with a big crew, 10 guys total. Shown in the pic above, we had Dave, Kip (open faced baloney sandwich) Malone (.com), Marc, Richaround, and of course Tony. Also riding were Charlie, my pops Lee, Kent, Sean, and myself. Ten guys total, which is a bit of a big group for such a long ride.

The ride was Charlie’s idea, it’s a route he’s done several times. And as with any Charlie ride, it was long, and there was copious amounts of lung busting climbing. 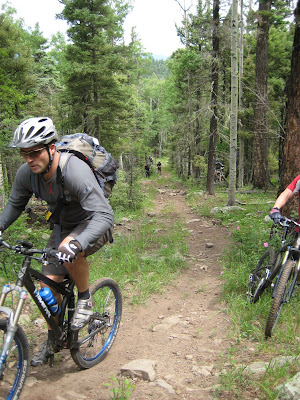 Sometimes when you take pics of really hard sections of a trail, they just don’t look that difficult. I assure you that the section of trail in the pic above was really quite steep, most of us didn’t clean it. 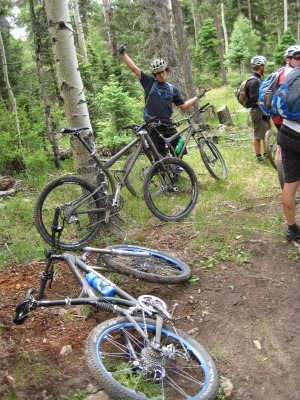 Here’s a pic of Tony. He’s doing a little celebration after our first descent, because everybody was covered in cow shit, but Tony was in front, so nothing got flung on him and he managed not to hit any. Yayyyy Tony! 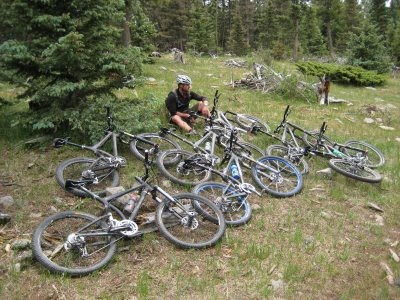 There was ten of us riding and seven Mavericks. There was an ML7, an ML7/5, four Durance’s, and an ML8. Above you can see them all piled together, along with a very sleepy Sean, who reportedly got about 1.5 hours sleep the night before. He also hadn’t been on a cross country ride in a year or two, and he was on a borrowed bike (the ML8 demo from the shop) that he’d never ridden before, and he powered through the whole ride. Good show Sean. 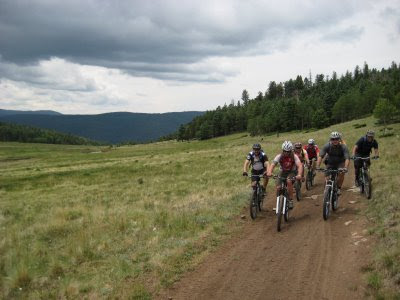 There were scenic meadows to be ridden through. 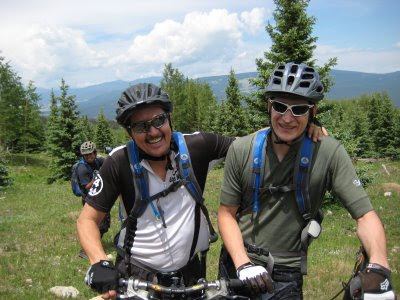 And scenic overlooks to pose in front of. 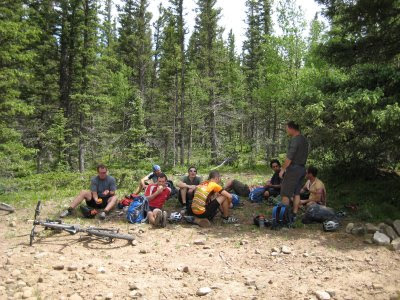 Four hours and seven miles later, we were officially finished with the “hard” part of the ride. With most of the climbing behind us, we stopped for lunch. At this point we were finally onto the legendary South Boundary trail, which I had never ridden before. Right after lunch was one of the most fun downhill sections I’ve ever done, starting with a loose high speed double track that led into a super buff, fast and narrow single track carved into the side of the hill. We were all hauling, enjoying some well deserved descending after several hours of brutal climbing.

Kent was riding with a sweet HD camcorder strapped to his helmet, taking footage for a website that he’s going to put together that combines riding footage with GPS maps and navigation info. He got some good footage of me catching up to my dad on a high speed section, as Kent was standing off to the side of the trail, watching us come and go. Hopefully I’ll get some of the video from him and put it up on the site soon.

Shortly after that first amazing downhill, it started to rain a little. Then it started to rain a lot, then it officially went from a rain to a downpour, and then a little hail was thrown in, probably because I was there and had just moments earlier been explaining to Tony that I dislike rain, but hail is my mortal enemy. The camera was buried safely inside of my pack, and all the wet & cold weather gear came out as we regrouped and huddled under some trees.

It was at this time that I became very proud of myself. For the first time in my entire mountain biking career, there was inclement weather and I was completely prepared. The night before, I picked up a new Endura Superlight rain jacket on my way out of the shop. Then I remembered to pack my Craft waterproof biking pants, which I’ve owned for a few years and never had the opportunity to use. I also had some water resistant Pearl Izumi heavyweight gloves with me, and I was wearing a Swobo wool short sleeve jersey and some sweet lightweight Swobo wool socks. The temperature dropped, everybody got soaked, people started shivering, and for once in my life, I was perfectly warm. I have never been so happy to own good gear. I expect to be seeing at least a couple of the guys on the ride in the shop this week to be stocking up on some legitimate rain gear. “Kind of” water proof jackets and hefty bags just don’t get the job done when you have 20 miles and 5,000 feet of descending left between you and the truck.

Even in the rain, and the resulting puddles, and the complete inability to see out of my sunglasses, South Boundary is an unbelievable trail, as many of you know. I can’t believe that I’ve been living in New Mexico for 12 years and have never ridden it. This is going to become a ride that I do at least once a year from now on. I’d definitely like to get back out again this year, hopefully without the rain this time.

The rain had stopped by the time we got to an amazing overlook of Taos, and it was safe to bring my camera out again. 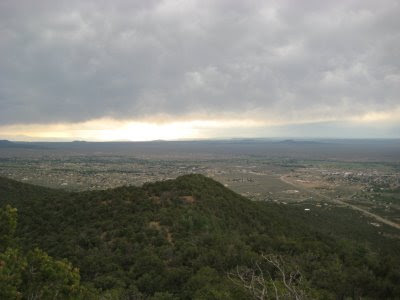 At this point, I had gotten quite muddy. 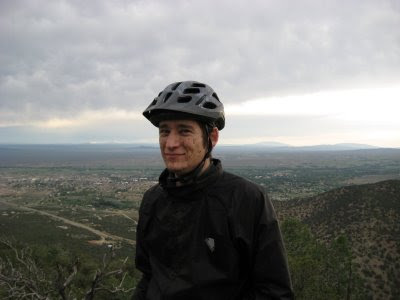 In the end, we all made it out relatively unscathed. Some were colder than others, a small amount of blood was shed, but for a group of 10 doing a 30 mile mountain bike ride things went incredibly smooth. Furthermore, there wasn’t a single mechanical on the entire ride, despite the incredible amounts of mud and abuse on the bikes, which I can only assume is a testament to Bikeworks’ mechanic’s skills, as we’ve built or worked on every bike on the trip. 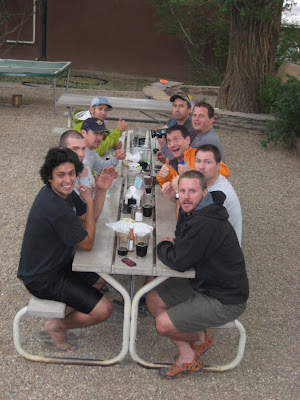 We regrouped, cleaned up, and then feasted at Eskies. Numerous pitchers were consumed, and slowly you could see life creeping back into everybody’s eyes.

Some weren’t quite satisfied, and needed a little ice cream to help get them through the long and tired drive back to ‘Burque. It was at Baskin Robbins that Tony found Jesus… in his ice cream cone, his face made out of chocolate chips. 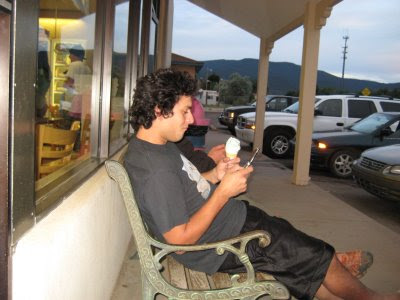 After the ice cream, all that was left as truck full of filthy bikes and bags full of soaking wet gear. 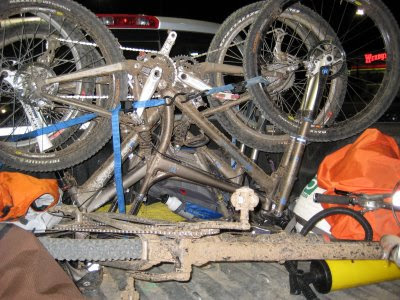 Basically, it was a perfect Sunday.