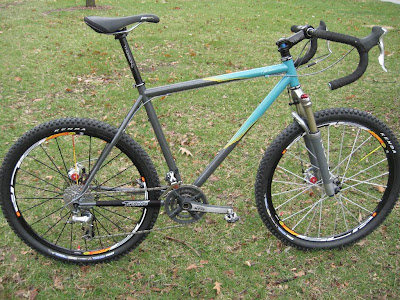 I was alerted about this bike from Bikefix, and then I found a pretty good article here…

This bike makes me feel confident that picking up Tomac as a brand for the shop was a good idea. Why? Because only a bike company that really loves bikes would do something like this. And if a company really loves bikes, chances are they’re going to make bikes that ride well.

I used to work with Clark Dolton (Tomac tech guy who was in charge of the DB10 project) and Joel Smith (Tomac’s new owner) back at Manitou. I was excited when they contacted me a couple months ago about becoming a Tomac dealer.

After spending a year riding with Clark and Joel, doing everything from SoCal cross country to North Shore ridiculousness, I knew that if they liked the way a bike rode, it would be a nice bike. When you add the fact that they have Johnny T personally putting his seal of approval on the bikes, you can rest assured that it’s going to be sweet.

Before signing on with Tomac, I had them send me a demo Snyper 140. It was actually Clark’s personal bike, not a regular demo, so it came pretty decked out with a full XT groupo and all the nice extras. The bike rode awesome, obviously, as I decided to buy them for our shop. I think it is a great addition to our trail bike lineup in the shop, as we will have 3 different 5 in trail bikes with completely different riding characteristics that suit different riding styles.

I’m not going to do a full bike review now, as my brain doesn’t seem to running at full capacity, but I’ll probably do one soon. I’ll just say that it pedals better than you think a single pivot can, it’s unbelievably stiff laterally, and I think I got more air on it than any bike I’ve ridden before. I’m no jumper, so it wasn’t a ton of air by any means, but the bike was just confidence inspiring.

We will also have a Snyper demo for the shop arriving with our first Tomac order.

That’s all I got for now.