19 Apr I actually got to ride a bike!

Yes, it’s true, I actually left the shop, almost for a full day Friday, and went out and played in the mountains.

I met Marc and Charlie at Cedro in the morning, and we proceeded to ride for several hours. We spun up the road to Tunnel, then we rode up tunnel, down to Otero, up Blue Ribbon, over to some other trail, and then another trail, then some new trail we hadn’t ridden before, then at some point we got onto Turkey Trot, out to Mars Court, on the road to Oak Flats, then a whole bunch more Cedro trails until we were back at our cars.
I was pretty much lost the entire time after we left Otero Canyon, until we got back into the heart of Cedro. I’m not too good at navigating in the woods. I can navigate in European cities where I can’t read the signs, and drunk navigate through Vegas Casinos like a madman, but get me out into the woods, when my life may depend on finding my way out, and I’m cooked.

I recently acquired a new-to-me Garmin 305 GPS compruter. Yesterday was the first time I had played with it on a ride. Hopefully I’ll start to learn the East Mountains better with the help of some maps. Charlie’s going to bring a map to the shop today and we’re going to figure out exactly where those new trails were. The trails were pretty sweet, very fresh and needing to be run in, but nice tight technical singletrack that will be a great addition eventually. There was just one spot where a couple of more switchbacks were needed, rather than just shooting straight up the hill. We’re not sure who built them, anybody know? 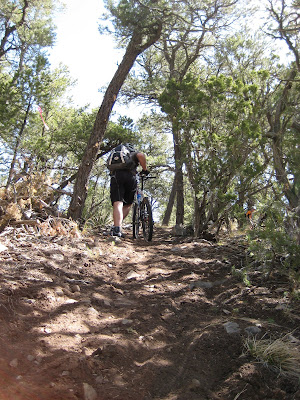 A switchback here would have gone a long ways.

We were testing out a few different products for Marc’s site, Bikefix, including a new Pivot 5 inch something or rather that he got on demo from some other shop in town. So I was riding Marc’s Maverick Durance, and we switched bikes back and forth several times during the ride. You can look for a full review from Marc in a few days on Bikefix, but my basic input is; The Pivot rode fine, a very nice bike all around, maybe a bit heavy, now can I please have my Maverick back? We were riding in perfect Maverick terrain, and still haven’t found anything that compares.

As we were testing products, the conversation was pretty hardcore bike dork, analyzing parts and ride quality and blah blah blah.

I got to try out Marc’s Ergon pack, which is a bizarre pack. He recently reviewed it on his site, and I pretty much agree with what he said. I think maybe next generation, a little more refined, and it will be seriously worth looking at. It really puts 99% of the weight onto your hips, it feels like a fanny pack that’s giving you a hug, and could be very nice for guys like me with frail little upper bodies who’s back and shoulders get sore when they try to carry anything more than 6 lbs.

Marc proceeded to get two flats at the same time, a direct result of there being tubes in the demo bike. Had it been set up tubeless, there would have been no flats. The lesson here is that tubes are stupid when you live in New Mexico. 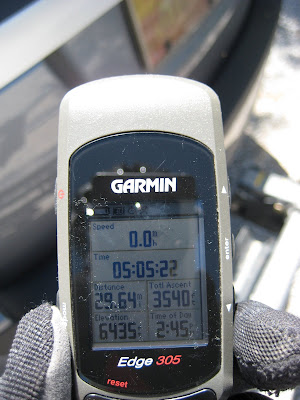 We did nearly 30 miles of mostly sweet singletrack. It was a fantastic combo of trails. I sure like living in Albuquerque.