We had a nice and busy and fun weekend.
First off, Dan and Charlie (and Guy) went off to race Friday evening in Gallup. Charlie, in his first race ever, posted a very respectable 6 laps (something like 80 miles of singletrack in a day, I didn’t know Charlie had it in him) which earned him 14th out of 27 racers in his age group. Just missed top half, sorry Charlie.

Dan and Guy were in the Duo Men race, and finished 6th place out of 22 teams, with 10 laps completed (5 laps each). Not bad for a couple of roadies, racing on 10+ year old hardtails. They certainly beat the pants off the other Albuquerque shop with a team out there, who came in last.

Looking through the results I noticed our friend Frankie Flats coming in 3rd in the 80+ combined age duo category. Nice going Frankie.

While Dan and Charlie were out playing, I was slaving away at the shop. I enlisted the help of Marc for the day, as running the shop solo on a Saturday isn’t exactly awesome. Marc has a knack for retail, and merchandising, and making a bike look good, and all sorts of stuff like that. So after staring at our wall of bikes for a day, he had some suggestions for us, which resulted in a sweet brown medium Maverick Matic being built up for demo. It’s still brand new, and I could sell it for $3300 right now. Our demo program is $50 for a day, and that money will go towards any bike that you buy. As the bike goes out for demos, the price will be reduced accordingly.

Our other demo bikes include a large Maverick ML8, a Large Maverick Durance, a 19″ Rocky Mtn. Slayer SXC 90, a 56cm Serotta Ottrott with full Campy Record build, and a 54cm Serotta Legend with full Red build. So basically, we have some sweet bikes to demo.

Another really good looking bike in the store right now is a 55cm (top tube) Langster London edition we have on consignment. 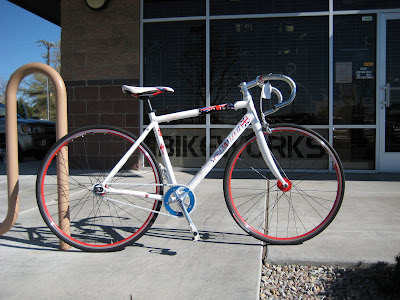 It has approximately no miles on it. we also have the rear brake and lever that it originally came with. We like this bike, it is very good looking. Fortunately it doesn’t fit any of us, so we can actually sell it rather than keep it for ourselves.

On Sunday, Dan and I participated in another local alleycat. This one was organized by Jesse, who won a couple of the past ones, and sponsored by us, The Coop, and some other shop. It was a good time, with around 40 participants. The theme was Our Lady of Guadalupe, and the course took us to various shrines and churches around town, hunting for candles with stamps affixed to the bottom. Dan and I came in 2nd and 3rd, following Chris Downs who took the win. Chris and I were chatting about collaborating on a race in early June, as it’s definitely our turn to organize one of these.
The finish included a number of prizes, as well as copious amounts of beer and pizza, a large grassy lawn, and a perfectly sunny lazy sunday evening spent with a bunch of bike dorks hanging out drinking. All in all, it was a great way to spend a sunday.
I seem to have lost my pics, thankfully I’m better with bikes than computers.

And that’s about it. Time to finish my beer and be getting on home.