Went out Sunday morning for some more fun up in Otero. I didn’t ride up there for a while, I guess a little discouraged by the closing of trails and not wanting to get gunned down by overzealous MP’s on 4 wheelers who thought I was smuggling WMD’s in my Chamois. So I had kind of forgotten how incredibly nice the biking is up there. It’s really hard to believe while riding some of those trails that you’re only 20 minutes away from Albuquerque.

I’m clearly not alone in feeling this way, as the Tunnel parking lot was full at 9:30 when I arrived, and parking had extended about 15 cars down the road at around 1:30 when I left. Strangely enough, we saw very few other people out on the trail, certainly not as many as you’d expect. And the one large group of bikers that we encountered, about 10 women, had parked elsewhere.

We ran into said large group of women bikers (not to be confused with a group of large women bikers, which would most likely be riding Harleys not Spez’s) on that new section of trail I was talking about last week. These gals were calling it “Crazy Johnny”, which seemed appropriate, as I have learned that Johnny V played a large part in building the trail, and Johnny V is at least a little bit crazy. We rode the trail the opposite direction, starting at Turkey Trot and heading toward Blue Ribbon, and it was a blast. Definitely one of the best stretches of trail out there. I also take back my comment from last week, accompanying a pic of Charlie pushing his bike up a stretch of that trail. I thought that the trail was lacking a switchback, but I now see that when coming from the opposite direction, that part of the trail is steep and awesome. Also, I’ve learned that Salinas rode up that section no problem on our demo Slayer SXC90 more than once. Which means that either Salinas has mad skills (possible), or that the Slayer is an amazing bike that will make the impossible possible and everybody should come to the shop and buy one from me (more likely).

We were riding yesterday with Chris, a long time Albuquerque mountain biker who seems to know everybody we know that has ever ridden a bike. I believe this was the second time I have ever ridden with Chris. The first time was several years ago, also at Otero, for the FOO ride where we hung a banner and organized to try and keep Otero open. Here’s a few pics of Dan and I from that day, that were recently sent to me by Jeni Turgeon. 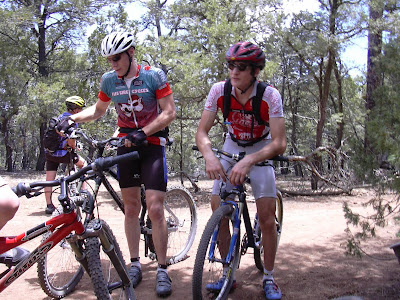 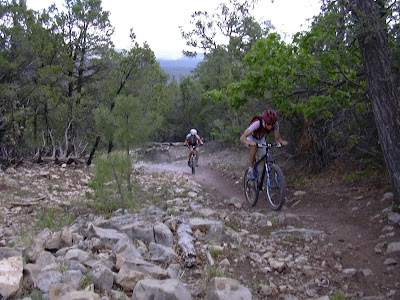 Those pics were taken just briefly before a massive hail storm blew in and Dan and I proceeded to get hypothermia very quickly (as you can see from the pics, my pack was one of those silly small ones that doesn’t fit a jacket, and Dan’s pack didn’t exist).
While descending Otero canyon, hub deep in runoff and hail, just trying to keep our numb hands on the bars, Danny got a flat. He was unable to fix it, on account having no feeling in his hands, and wanted to thrown the bike up in a tree and make a run for it. I find this amusing for 2 reasons. 1) Danny has probably changed hundreds of thousands of flats in his life, and 2) I just noticed in the pic, that it wasn’t his bike, it was demo, so the lack of concern of the bike is a little more understandable.
Anyway, Chris and our former fearless leader Stevie changed the flat for us, and in the end we all made it back to the car alive. Proving that although having more than 4% body fat can make you slower going up the hill, it can go a long way in making you not die when the temp drops below 70 deg.

I also rode yesterday with our favorite Doc, Dave. He was on his new custom 29er Ti folding DeSalvo with a Rohloff 14 spd hub that we built for him recently. It’s a sweet ride.

Rounding out our group was Travitron, Charlie and Sihu. Travis told me stories of MTB racing in the glory days for TWP (which I believe stood for Travis Will Prevail) with a 16 year old Floyd Landis. Then he rode wheelies for the next 10 miles. Charlie was very excitable and loud, as expected, and Sihu, sadly, did nothing hilarious for me to write about. Maybe next time Sihu, maybe next time.

Lastly, I have decided that descending Blue Ribbon is the best place to test a full suspension bike that I can currently think of. It has all sizes of rocks, you can go really fast, a few good launches, and it is really really fun.