Posted at 13:55h in awesomeness, events, race review by bikeworks505

Sunday was the Crank 2 Alleycat, and it was good.
Primarily sponsored and organized by Gerhardt (owner of Heart & Soul Salon and notorious fixed gear aficionado), the event was a big success, with 58 riders signing up at the start. This was more than anyone expected, and probably the biggest turnout at an alleycat in Albuquerque to date.

We started downtown, with six stops around downtown as well as along Rio Grande, mostly at parks. The farthest stop was at the Montano bridge, which is conveniently located right along the Bosque bike path.

I rode primarily with Marc, and the two of us rode for brief moments with Danny, until he would inevitably drop us. However, pure speed isn’t everything in an alleycat, as Marc and I came in first and second, with Danny rolling in behind us. Towards the end we got separated, and Danny got slowed down when he was unable to find one of the smaller, more obscure parks off of Rio Grande.

At each stop, there was one of those raised letter sticky labels stuck to something, that had to be found and then a crayon rub was preformed to take it’s impression and prove that you were there. At the end of the race if you didn’t turn in the paper with all six crayon rubs, you didn’t technically finish. This required the racers to kind of keep their head together while frantically racing, as you had a few things to make sure you didn’t loose after each stop. Danny unfortunately managed to misplace his sheet after the sixth and last stop, thereby nullifying his third place finish. He acted like it was an accident, but I’m going to assume he did it on purpose, knowing that Marc and I had already taken first and second, and feeling that maybe it was bad politics for him to take third. That’s what I’m going to assume anyways. It might also be that he wasn’t zipping up his backpack, and he was freaking out because he realized that despite his repeatedly crushing me the entire race, I had managed to get ahead of him at the end.

Gerhardt also decided to teach us a lesson that many hadn’t been taught since grade school : READ THE INSTRUCTIONS!
Along with a map, crayon, and the manifest sheet, there was a short set of instructions and hints included. These were promptly ignored by more than a few participants, and included crucial information such as where to finish, and where in the 4 story parking garage we might find the label. At the finish (which was at NYPD pizza) I heard more than one person mention that they went to the start first (about 7 blocks away), got confused (I think I won, nobody else is here!) and then get pointed in the right direction.

At the finish, we were all treated to copious amounts of pizza and numerous pitchers of beer. This kind of blew me away. After participating in numerous traditional mountain and road bike races, with entry fees usually around $40, all I’ve ever received for my participation is a T-shirt I don’t need and maybe a free powerbar or two. Then at a free local event I get a good lunch and my buzz on afterward for free.

The prizes were rad as well. Including a selection of messenger bags, cool top tube pads, several gift certificates, and a complete bike raffled off for all the finishers. The fastest three men, women, BMXer, DFL, as well as others all received prizes.

Thankfully there were no reported crashes, which was a concern for many with the recent tragedy in Chicago of a young man getting killed while racing in an alleycat. These events are beginning to get a bad reputation, and it doesn’t have to be that way. With all the participants riding respectfully and carefully, we have no negative impact. We were all encouraged to be safe and courteous at the start, and I think everybody listened.

There was some bike carnage though. 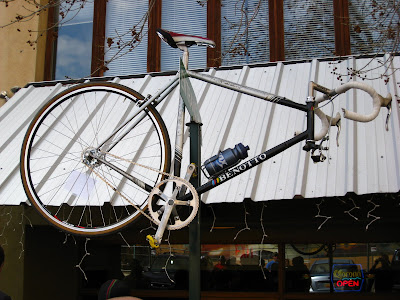 Amazingly the young man riding this bike managed to not loose his face when the fork gave out. He was reportedly riding in the parking garage, and layed it down gingerly. He seriously didn’t appear to have a scratch on him, which is unbelievable. The fork cracked just below the lugs, and flexed back until the tire was rubbing on the top tube as it gave away.

Another rider also lost a crank arm, and reportedly rode quite a ways one legged to finish (luckily it was the left arm, and not the right).

The press even came out to play. There was a reporter and a cameraman from the Albuquerque Journal. They said there will be a piece in the paper soon, as well as some video on their website. I managed to get them a Bikeworks business card, let them know that I’m an owner at the shop, and that I won the event. Hopefully a little free publicity for us.

And that’s about it. It was a great way to spend a sunny Sunday. Thanks again to Gerhardt for organizing such a fun event, and to NYPD for putting up with 60 smelly kids and their bikes, and everybody who volunteered and helped run the event.