24 Hours in the Old Pueblo has come and gone, and the Dan’s are definitely glad they attended.
It has been five years since I last did this race, which was the one and only other time that I have participated in a 24 Hour race. It seems that 5 years is enough time to forget the suffering that an event like this can cause.

The whole trip was an adventure from the get go. We loaded up in the battle wagon and got out of town around 12:30, about two and a half hours later than I had hoped to. It was a long hectic morning of packing and tying up loose ends at the shop.

The battle wagon seemed to be running fine, and we made it to T or C before needing gas. That’s when I discovered that somebody managed to loose the gas cap while I was gassing up on our way out of town. So we embarked on an hunt through the exciting little town for a gas cap. In the end we had one that worked more or less. This turned out to be a very good move, because the rest of the drive consisted of foul weather, and we surely would have ended up with gallons of mud and water in the tank.

The weather turned on us at around Hatch. Raining on and off. Once on I-10 we could see the storm we were headed for, the one that was supposed to be out of Arizona by then. It was a little foreboding, but it did make for a beautiful sunset. 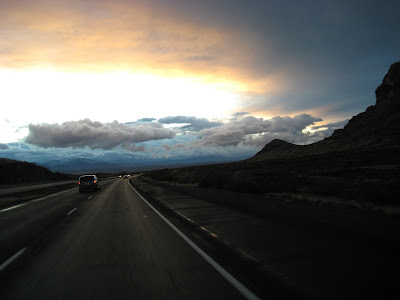 We picked up our team mate Travitron in Tuscon, who flew in on account of being very important and having a grown up job and all. At this point it had been raining on us for a few hours. The city of Tuscon was soaked, as it had been raining there for a couple of days. Debating whether or not to get a hotel room and drive out to the race in the morning, we made a call to Marc, who had been at the race site since thursday. Marc informed us that although it had been raining, it was now quite nice. This seemed a little improbable, as the race is only about 40 miles outside of Tuscon. But, we decided it would be better to be there earlier rather than later, and decided to forge ahead.

Marc assures us that it had been nice when we talked to him, but that only lasted a little while, then the rain returned. Then the rain became snow. This happened right about the time we hit the 10 mile dirt road. The road was reportedly smooth and fast, driveable at 50mph on thursday afternoon. By friday at 10:30 however, it was barely manageable in the battle wagon. We creeped up it averaging about 1mph, constantly fearful of parts jiggling loose, or falling completely into one of the many giant puddles.

We landed at camp about 11:30, and it was still snowing. We were lucky to have friends already there with a spot for us and camp set up, complete with an awesome propane heater, because it was cold and miserable. The energy in the place was pretty low, everybody wondering what happened to the 70deg and sunny they were expecting, and not looking forward to what could be a very miserable next couple of days.

The rain did stop during the night, and we woke up to an overcast and soggy morning. 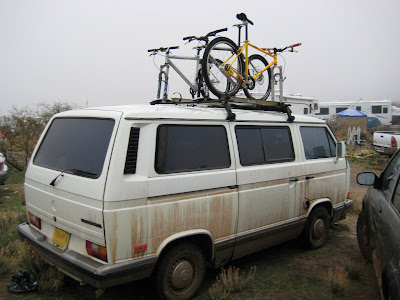 We set about getting organized and prepared for the 12:00 start, keeping an eye towards the slowly ascending cloud coverage.

Danny was elected to go first and suffer through the 400 yard LeMans start, on account of his gazelle like running abilities. He was working hard to get his game face on all morning. 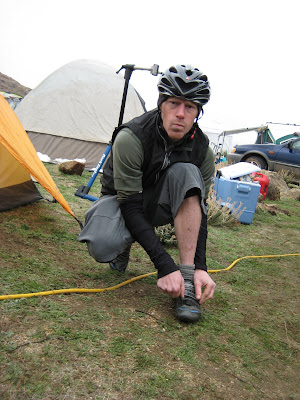 With a reported 1600 plus racers participating, we knew that getting out in front early was crucial. Danny came flying through the start in the first 30 or so runners, I handed him his bike, and he was off and riding before the huge crush of racers hit and the traffic jam slowed to a complete stand still, with racers walking their bikes. 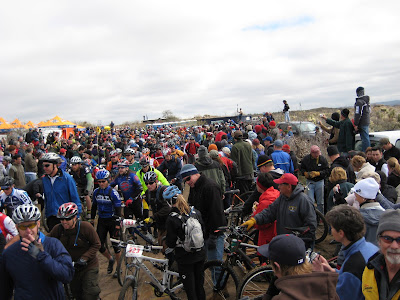 We knew Danny had done well, and there was much rejoicing. 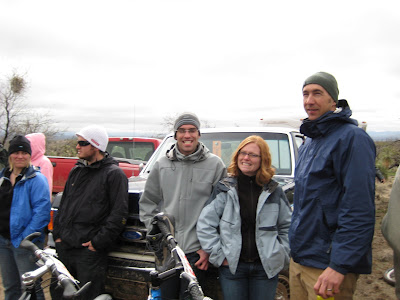 He ended up finishing his first lap at 8th place as far as I could tell, which was very exciting.
Travitron was off next. The first lap was reportedly a complete mud fest, making it difficult just to stay upright. By the second lap, however, the rising temps and trail traffic had turned the mud to a peanut butter like consistency, making it difficult to simply keep your wheels rotating.
Ryan went third, and by the time I headed out around 5:00, the trail was perfect. The ground was just moist enough to give that super-hero traction, and dry enough that it didn’t slow you down or stick to your tires. By the end of our first round, we were sitting in 7th place.

Then we kind of fell apart. The night wasn’t so kind to us. We decided to switch to double laps as Travitron headed out for the second time. He unfortunately managed to tweak his back on the first lap, and by the end of the second lap had aggravated it to the point where he could barely move, let alone ride a bike. He informed us that he was out, and we were sad.

Down to 3 men, our hopes of doing particularly well were thrown out the window. Then Ryan hit the wall hard on his 3rd lap, and not having any food on hand, just sucked it up and pushed through to finish what must have been a very difficult lap, finishing at about 1:30 am.

Danny and I both went out and did our double laps, with Danny finishing his at around 7:00 am. I knew he would be finishing around then, and actually woke up around 6:30 wondering if I should go out again. After giving it about 3 seconds of thought though, I decided it would be a lot better to just stay in my sleeping bag, seeing as how it was all dark and cold outside, while my sleeping bag was pretty warm and soft.

With nobody waiting at the exchange tent to meet him, Danny came back up to camp to rally us. He reportedly attempted waking me up, and I responded with “rmflehumflerumf” and rolled over and back to sleep. Ryan, obviously being much tougher than I, got up, got ready, and headed out for what had to be another very challenging lap. Thanks Ryan.

When Ryan got back, I had finally made it out of bed, and was waiting for him in the exchange tent. The plan at that point was for me to do 1 lap, 1 for Danny, and 1 more for me if we hustled and could get out before noon.

I apparently hauled some serious booty on my lap, returning to the tent before Danny had arrived, expecting me to be 10 minutes or so slower. Not wanting to waste time, I headed back out again, hoping to come in before noon and have Danny waiting in the tent for one last lap.

I was feeling good and turned out another respectable time, coming around the finish line around 11:30. Then right near then end was Danny and Travitron, waving me down as I approached, beers in hand. They had decided to cut our losses, skip the last lap, and get out of camp quickly and miss what would certainly be an epic traffic jam.

In the end I believe we finished 14th, with 16 laps completed.

It was a great race, very well organized, friendly racers, great atmosphere, and a very fun course. We’ll probably make it out again next year, perhaps a little more organized and in a vehicle that can go over 50mph in a head wind.

Thanks everybody for putting up with our goofy short business hours, it was the only way we could get out an play. 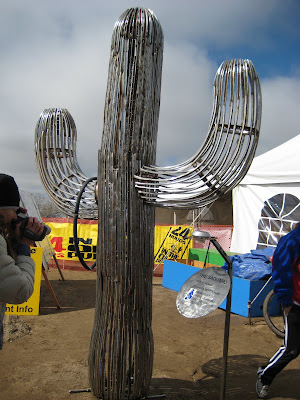 This cactus was made from old bike rims, and it was cool. 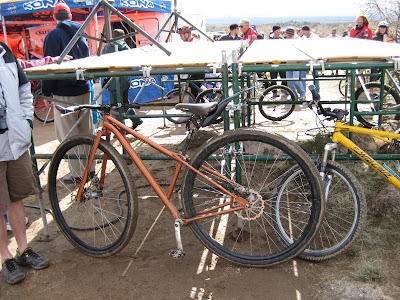 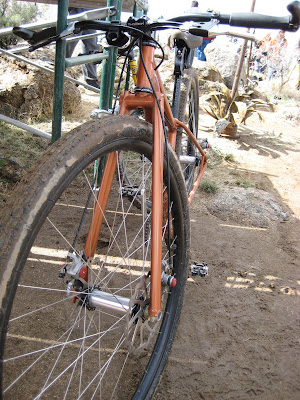 I guess it is difficult to slow down those big wheels.