Posted at 23:49h in awesomeness, events by bikeworks505

The Going Postal alleycat on Saturday was complete success. There was a solid 30 person turn out, and everyone seemed to enjoy themselves thoroughly. 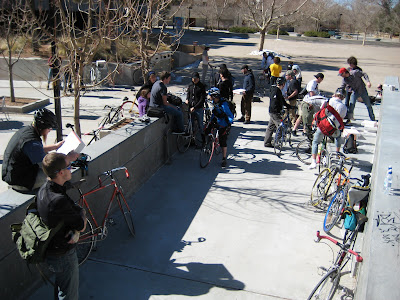 I was lucky to get to join in on the fun, while Swinton selflessly manned the store solo for a few hours.
We started from UNM, and were each issued an empty USPS box, which we were to carry with us. This resulted in a bit of a scramble, as several people either had no bag at all, or had a bag that was too small. The boxes had a map and a list of four post offices around town; Central east of San Mateo, right near the airport, right on the old town plaza, and Washington near Menaul. And the finish was right here at Bikeworks. At each post office, we had to get the box stamped by a post office worker, proving that we had in fact been there.
I chose to go in the order that I just listed, which turned out to be a popular route. A lot of other people chose to do it opposite, shooting downtown first. In the end, I think going downtown first was a faster route.
I started off cruising up Campus/Copper with the Fat Tire crew and Salinas, with Max and Gerhardt about half a block ahead of us, slowly pulling away. I wasn’t pedaling too hard, mostly just chatting with the guys. But after a few minutes my competitive side got the better of me, and I started pedaling a little harder.
I was the first to arrive at the Alvarado post office, with a handful of guys just a minute or so back. I went inside to find a rather long line that didn’t look like it was going anywhere anytime soon. I took my place in line, and began to politely and very anxiously watch the minutes tick by while I went no where.
Then all of a sudden, Johnny V busted into the post office, yelling like he was about to rob the place. He informed all us suckers in line that he was participating in a bike race, and that he simply needed a stamp on his box, and that if nobody minded he was just going to walk to the front. He got some dirty looks and under the breath snide comments from the line-people, but the postal worker was game, and Johnny had his stamp in no time. That’s when I saw the light, jumped out of line and got behind Johnny. Salinas was there taking pics and video of the whole incident, which I want to see, because it was really quite a scene.
I had no idea where the next post office was, beyond the fact that it was real close to the airport. Fortunately as I got close, I caught up to Aaron, who was coming up from Old Town. He showed me an awesome shortcut that included hopping a little fence and suddenly we were there.
There was just one old grumpy lady working in there, and a couple of customers. She argued with us that she wasn’t allowed just to rubber stamp our packages, but gave in after a minute. I heard later that the same lady refused to play along, and several people had to buy stamps to get a receipt and proof they were there.
Old Town was quick and easy, and the gal working there knew exactly what was up when I walked through the door.
The washington office was packed, but our friend Dona was working. I ran directly over to her and got out of there in no time. I heard that later on she was just standing by the entrance with her stamp waiting for the bikers to show up, with a giant line of people waiting to ship stuff.
I ended up getting second place, getting thoroughly beaten by a guy named Jesse, who was wearing aero booties. Salinas didn’t seem the least bit surprised that he won by so much, so I didn’t feel bad.
We had a couple of cases of PBR waiting for the racers, and we had four giant pizzas delivered, which lasted about ten whole minutes.
It was a beautiful day, and quite a few people hung out for a while outside. It was a lot of fun to have that many cool people at our shop. It’s the exact type of thing we knew we wanted to do when we first decided we were opening a bike shop. We’ll do it again for sure.

Thanks to Dave and Chris for organizing such a fun event. 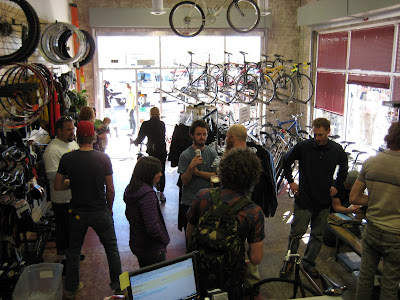 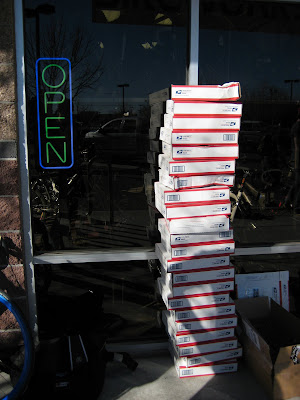