Update: sold the Commencal, getting tired of looking at the BMC’s. So how about $800 for the Trailfox, and $750 for the Superstroke. Is that any more enticing?

We have a little pile of frames that we’re selling. It’s part of the collateral damage of opening up our own shop. All of a sudden we have a bunch of bikes from companies we don’t sell, and although we think they are good bikes, we’re better served to be riding what we’re selling (and the stuff we’re selling is better anyways, otherwise we wouldn’t have decided to sell it).

This is a rowdy bike, definitely over built for a 150mm (6″) bike, and ready to take some abuse. The frame has very few rides on it, and the only signs of use are the scuffs along the chainstays from Charlie’s heels rubbing because he’s so duck footed. Frame sold for about $2500 new, we’re asking $800 OBO 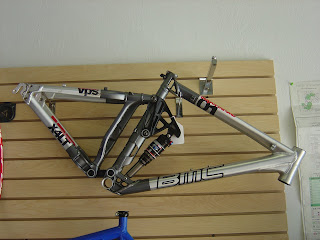 This is the lightest 5″ bike I know of. It doesn’t have very many rides on it, like the other BMC, it was a part of Charlie’s arsenal of bikes, so even though he rides all the time, no single bike sees that much action (except of course the Maverick ML7.5, which I believe sleeps in his bed with him). Online, the “rock bottom price” at a few places is $2000. We’re asking $1000 OBO

In the picture below, the Trailfox has a few parts on it. We’re selling it as frame only, but if there’s something in the pic that you want as well, I’m sure we can work something out. 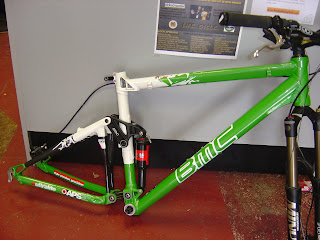 Okay, last but not least is a 2007 Commencal Meta 5.5 VIP, 18″ frame.
I don’t have the full spec sheet on this one, a little harder to find. But here’s what I know:
It is a 5.5″ travel all mountain bike. 7.4 lbs on my shop digital scale. It has an RP23 shock on it (which go for nearly $400 alone), originally came with an RP3 but it was problematic and upgraded. This is the VIP model, which is their nicest one and not too common from what I can find. This actual frame was on display at interbike 2006, and we bought the demo model.
http://content.mtbr.com/TRP_13_296_6crx.aspx
unfortunately, it was packed poorly and the downtube received a lot of cosmetic damage in shipping. Like the other frames, it doesn’t have many rides on it. If it wasn’t for the scratches from shipping, it would look nearly new.
This bike gets really good reviews all over the mags and forums online. I believe it sold for around $1400 new for the frame. We’re asking $500 OBO for the frame (pic of complete bike, obviously. Most the parts on the bike are around still too and for sale). 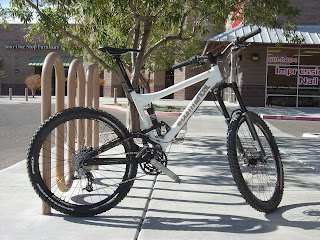